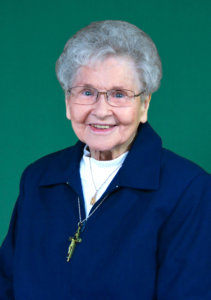 She began her ministry as a cook, first in the kitchen of St. Canice Convent in Pittsburgh (1948) and then at St. Joseph Infant Home in Ebensburg (1948-53). She expanded her culinary responsibilities as Supervisor of the Kitchen at the Motherhouse in Baden (1953-62) where she cooked three meals a day for more than 200 people and where her famous salad dressing is still served.

A self-taught handywoman, Sister Anthony eventually learned all the nooks and crannies in the Motherhouse and, for 47 years, she directed or consulted on plant maintenance and capital improvements beginning in 1962. A talented craftswoman and loving caretaker, Sister Anthony managed projects from installing new windows to laying blacktop to replacing the roof. One of her favorite places was the Motherhouse Chapel where, in a recent video, she reverently shared the chapel’s history, renovations and spiritual symbolism.

Whether in the chapel, kitchen, or boiler room, Sister Anthony said it was an honor to make the Motherhouse a comfortable home for the Sisters and their guests. During her 75th Jubilee, she recalled meeting Sister Anna Joseph in the kitchen of St. John Gualbert’s convent during a visit with a grade school friend. Inspired by Sister Anna’s example and moved by the Holy Spirit to enter religious life, she said, “I wanted to become a Sister to take care of other Sisters.”

Sister Anthony made time for “side hobbies,” such as ceramics and framing, creating beautiful works of art that enlivened the Motherhouse halls and sold quickly at the Congregation’s annual Harvest Festival. Grateful “that God picked me” for such a rewarding and joy-filled life, and especially for the blessings she has received from the community, Sister Anthony believed that “prayer is the answer to everything.”

Predeceased by two brothers and two sisters, Sister Anthony is survived by nieces, nephews, grandnieces, grandnephews, Associates, and the Sisters of St. Joseph of Baden. The Sisters are grateful to the Supportive Living staff for their care of Sister Anthony.

Mass of Christian Burial will be offered Wednesday, July 27, at 4 p.m. in the Motherhouse Chapel. All visitors who enter the Motherhouse are required to show proof of vaccination.

Donations in the name of Sister Anthony may be sent to the Sisters of St. Joseph Memorial Fund, Development Office, 1020 State St., Baden, PA, 15005.

Make a donation in memory of Sister Anthony.