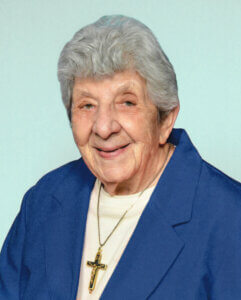 Primarily teaching second graders, Sister Mary Urban found joy in preparing students for First Holy Communion and modeled the compassion of the Sisters of St. Joseph who taught her in grade school and inspired her to enter the Congregation.

Sister Mary Urban was a missionary from 1982-1986 in Liberia, West Africa, where she served as a teacher and supported families in a rural area. Despite the challenges, she said “being with the people” was one of the most rewarding experiences of her life. In 1984, she wrote to the Mother Superior: “Isn’t this what God expects of a missionary – to go to the neglected, the spiritual needy, the people who are hungry for Him?”

With ‘sleeves rolled up for ministry’ in 1986, Sister Mary Urban began helping to care for the Motherhouse grounds. Up until recently, she continued to tend a garden that she visited regularly to feel the peace and calmness of God’s presence. She credited her parents, who operated a dairy farm, for her love of working outdoors and being among God’s creatures.

Known for her quiet and humble nature, Sister Mary Urban said she was energized by daily Mass and believed the best way to approach each day is to “do the best we can because that’s all God asks of us.”

Mass of Christian Burial will be offered Tuesday, November 29, at 3 p.m. in the Motherhouse Chapel.

Donations in the name of Sister Mary Urban may be sent to the Sisters of St. Joseph Memorial Fund, Development Office, 1020 State St., Baden, PA, 15005.

Make a donation in memory of Sister Mary Urban.