Two student scholarship plaques bearing the names of two of our Sisters recently were contributed to the Sisters of St. Joseph Archives by Larry Murray, who graduated from eighth grade at St. Raphael School in Morningside in 1957. 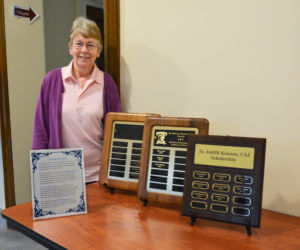 Larry says that one of his teachers, Sister Brigid Grimes, had a profound influence on his life. She nurtured in him a love of history, and he eventually earned his PhD in American History. In 2003, he established a scholarship in Sister Brigid’s memory, which has been awarded annually to an eighth-grader at St. Raphael who excelled in American history.

We are grateful to Larry for his long-time support of Catholic education. We are humbled to know that 23 children have received scholarships in our sisters’ names because of his deep appreciation and affection for them.