As an educator, Sister Anna Marie Gaglia nurtures the academic and personal growth of her students by providing a safe space to listen to their thoughts and concerns. Jackie Karasek Knupp, who was once one of those students, is grateful that a conversation with Sister Anna Marie blossomed into three decades of friendship.

“We’ve stayed close since I graduated,” Jackie says. “She was present for the birth of my three children and is the godmother of my middle son.”

Growing up in Ambridge, Jackie attended Mount Gallitzin Academy where she says teachers like Sister Therese Melucci and Sister Carolyn Wiethorn modeled compassion and generosity. She credits Sister Rosie Schwartz for getting her involved in basketball and says one of her fondest grade school memories is of watching Sister Rosie and the CSJ Musicians perform at the annual harvest festival.

“Sister Rosie had such a fun spirit. She’d sing ‘The Lion Sleeps Tonight,’ and it reminded us that the Sisters liked to have fun too.” 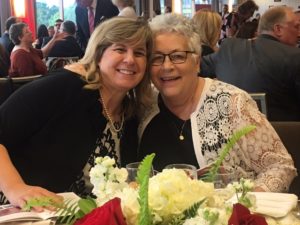 When it was time to transition to high school, Jackie opted for public school even though her three older siblings attended Quigley Catholic High School. Throughout her freshman year, she felt increasingly unhappy at school but was unsure of how to move forward until her older sister, Helene, suggested that she talk to Quigley’s guidance counselor, Sister Anna Marie.

That summer, Jackie visited the motherhouse and recalls sharing her frustration, unhappiness and uncertainty with Sister Anna Marie while sitting on the steps overlooking the St. Joseph statue. Although the school year was nearly started, Sister Anna Marie assured Jackie she would help her transfer to Quigley if that’s what she wanted to do.

“Sister Anna Marie didn’t really know me – she knew my sister – but she took the time to talk to me and to listen,” Jackie says. “She was willing to make it happen and it just changed the whole trajectory of where I’m at in my life.”

Upon transferring to Quigley, Jackie began to thrive in the school’s intimate atmosphere just as she had at Mount Gallitzin. She developed an interest in the law during a history lesson about landmark Supreme Court cases, which eventually led to law school and her current role as the Westmoreland County Assistant District Attorney.

She embraces her role as an attorney compassionately and strives to hold people accountable for their actions while trying to understand their situation. She feels this is increasingly important as the area’s opioid epidemic continues to bring people from all levels of socioeconomic status into the courtroom.

“We see people involved in the criminal justice system who likely wouldn’t have been involved if it weren’t for drugs. For me, personally, that’s part of understanding that every person has a story. They aren’t just junkies – they are people.”

Sister Anna Marie, who is now principal at Holy Sepulcher School in Butler, sees the Sisters’ charism, or spirit of unity, in Jackie’s commitment to justice and peace and through her love and support of her three children. Although they maintain busy schedules, Sister Anna Marie and Jackie have celebrated and comforted one another during life’s happiest and saddest moments. They most recently reconnected while attending the 50th anniversary of Quigley Catholic High School, where our Sisters taught from 1967-1994.

“Jackie quickly became a friend despite the age difference because of our shared values and love of life,” says Sister Anna Marie. “She and her family are such fun, too!”