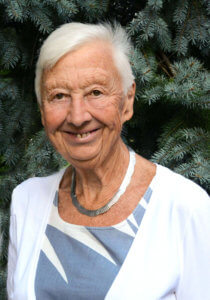 Sister Monique Dietz, L.B., who entered the religious community of the Ladies of Bethany in the Netherlands in 1956, died Monday, September 21, 2020, at the Sisters of St. Joseph Motherhouse in Baden, PA. Born in The Hague in 1933, Sister Monique was the daughter of Johannes Petrus Dietz and Wilhelmina Carolina Kleÿn Dietz who met while participating in a singing group.

One of three sisters in a musical family, Sister Monique recalled a childhood fraught with fear and uncertainty as they lived through the Nazi invasion and occupation of their country from 1940-1945. She had vivid memories of playing in the trenches, nearly starving, and bullets flying through their living room.

During her years at universities in the Netherlands and Germany, Sister Monique came to know the Ladies of Bethany. Inspired by their ecumenical spirit, Sister Monique was attracted to what she called “a movement toward bringing about Christian unity while still being true to yourself.”

After ministering in Europe, Sister Monique was sent to the United States, arriving in Pittsburgh in 1963. At the time, the 30-year-old remembered the physical and emotional anxiety of this life-changing experience of feeling alone in a foreign place. For Sister Monique, it became a moment of grace, a testament to faith. “I looked up at the sky and realized that it’s the same sky, the same God,” she said.

Sister Monique moved in to a 100-year-old farmhouse on the edge of the poor neighborhood of Northview Heights, and was welcomed into an established local community of the Ladies of Bethany. For the next eight years, she served as Director of Religious Education and Social Services at the Vineyard Neighborhood Center, which was initially located in the basement of the farmhouse.

From 1973 to 1987, Sister Monique emerged as a local leader and passionate voice for older adults, advocating for affordable housing, health care and creative aging programs. She served as Program Director and Executive Director of Vintage, Inc., in Pittsburgh (1973-75); Coordinator and Director of Creative Aging Program at Christian Church (Disciples of Christ) in Pennsylvania (1976-82); and Vice President of Community Organization and Planning, Director of Community Organization and Development and Community Outreach Consultant for Presbyterian Association on Aging in Oakmont (1982-87).

For the next two years, Sister Monique worked on an international task force to help shape new structures of government for her community. From 1990 to 2009, Sister Monique served as Chaplain at Forbes Regional Hospital, and, most recently, volunteered at the Thomas Merton Center.

Soft-spoken and humble, Sister Monique had a generous heart for those facing poverty, injustice and aging. An avid walker, she developed the lifelong ritual in Europe where she walked daily from noon to 2 p.m., passing time in between university classes. The practice, she said, revitalized her energy and immersed her in God’s creation. In recent months, as her energy waned due to cancer, Sister Monique reflected on what she called a consoling thought: “Our life will be changed, not taken away.”

Sister Monique is survived by two sisters, Diny Dietz and Stef (Fred) Dietz Brink; a niece, Maartje Brink Luÿsterberg; a nephew, Kasper Brink; two grandnieces, Emmelie Luÿsterberg and Olivia Luÿsterberg; Eleanor Doidge, L.B., of Chicago; and the European members of the Ladies of Bethany. The Sisters are grateful to the Supportive Living staff at the Motherhouse for their care of Sister Monique. A Memorial Mass will be scheduled at a later date. Donations in the name of Sister Monique may be made to Catholic Relief Services or the Sisters of St. Joseph of Baden.