In the spirit of the warm hospitality of the Sisters of St. Joseph, Sister Mary Elizabeth “Liz” Brush always kept her office door open at St. Augustine Plaza, a senior residence in Pittsburgh.

As building manager, Sister Liz responded to the typical questions involving misplaced keys, trash days, laundry rules, and seemingly endless paperwork. But what residents will remember most about Sister Liz, who retires this month, is that she listened compassionately to them, particularly during times of grief, sickness and loneliness. Through her presence, Sister Liz contributed to an environment of caring and community at St. Augustine.

“I’ve enjoyed her company very much. You could always turn to her for anything,” says resident Pat Knapp. “Every morning when I passed by her office, she always wished me ‘good morning’ and smiled; it’s not going to be the same without Sister Liz.”

Nearly all of the residents, as well as staff and board members, expressed their affection for and gratitude to Sister Liz during a retirement party at the Plaza in June when they lingered for hours to share good food and conversation with the guest of honor and guests. 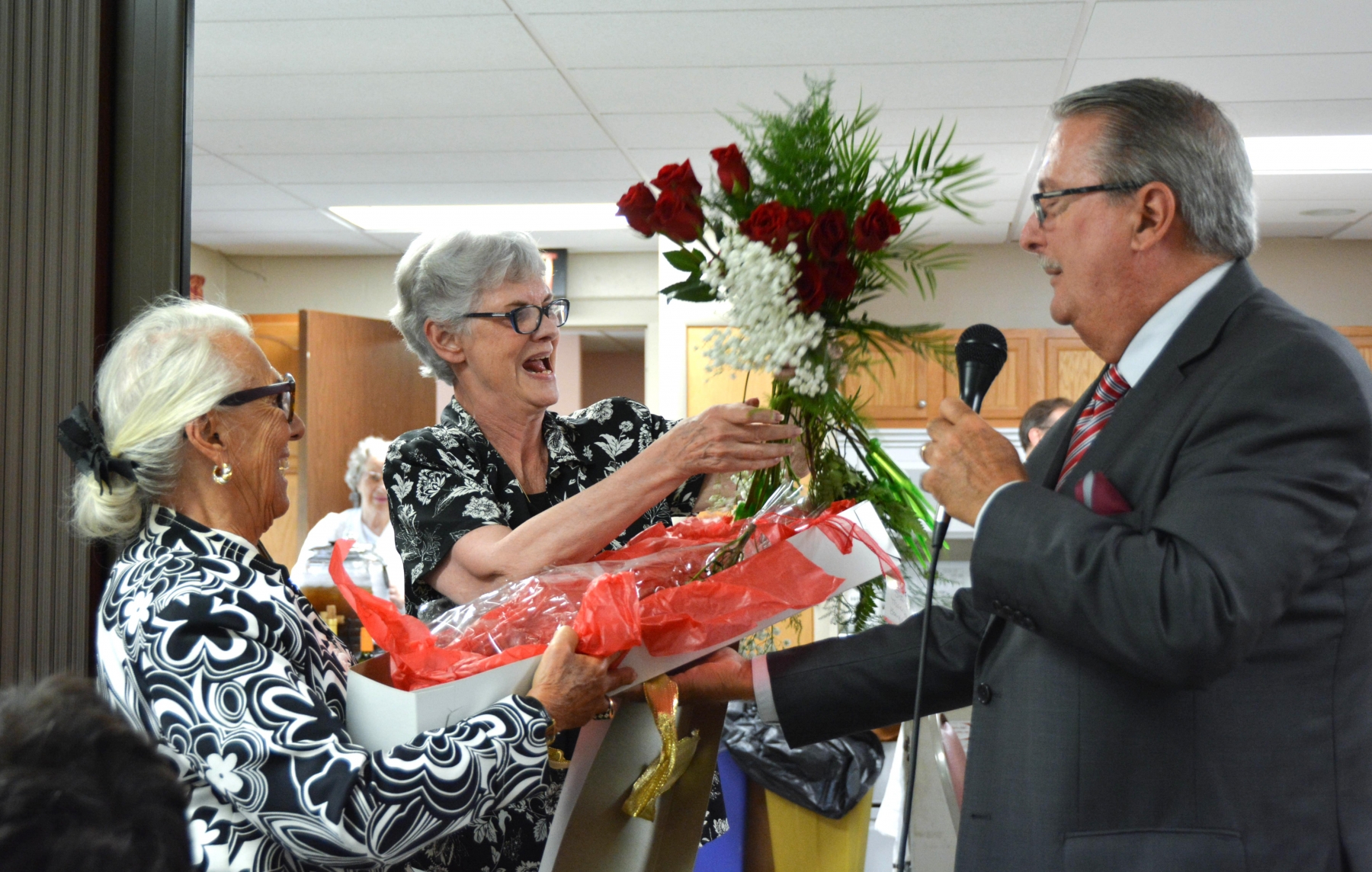 Georgia Brown and Don Delsandro, both members of the St. Augustine Plaza Board of Directors, present flowers to Sister Liz Brush, center.

“I enjoyed all my service, but I am truly happy to have had the opportunity to serve the poor and elderly. It was so fulfilling to get to know people at a deeper level,” she says.

Just as Sister Liz has embraced service to the dear neighbor without distinction, she has encouraged residents to reach out to one another. She brought residents together for monthly dinners and special occasions and always included them in the planning.

More than half of the 90 residents gathered for a Memorial Day celebration, which was the successful result of the collective generosity of residents. Sister Liz challenged the residents “to feed the piggy bank” with small donations or to contribute a dessert to the event. “The response was overwhelming. Residents and staff contributed $300 and three tables of dessert,” she says.

Sister Liz’s ability to interact with the tenants attracted high participation levels at events, according to Carol Kist, who succeeds Sister Liz as manager. “For me, Sister Liz was a good role model. For the tenants, she truly became part of their family.”

For Sister Liz, the best part of her tenure was having the opportunity to be available to people. “I was never too busy that I couldn’t sit and listen to a resident. I discovered that I don’t have to solve everyone’s problems, and that just listening often helped.”