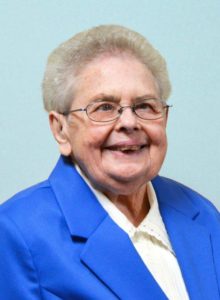 Sister Agnes Mary started ministry as a cook in the Motherhouse kitchen, which led to 64 years of serving not only daily meals, but also warm hospitality, to sisters and friends alike. She served as a cook, dietary manager and cafeteria supervisor in the Congregation’s infirmary, convents and schools. From 1990-2015, Sister Agnes Mary worked on the dietary staff of St. Joseph Convent where she befriended co-workers, welcomed guests, and offered prayers of support. Shortly after assuming that position, she enrolled in an independent study program in Dietary Management.

An avid reader, Sister Agnes Mary relished the diversion of taking courses in theology and pastoral care at Seton Hill and Carlow universities. From 1978-81, she served in pastoral ministry at St. John in Uniontown, and St. Joseph in New Kensington.

Defined by simple goodness and sincere humility, Sister Agnes Mary had a heart full of gratitude. She cared deeply for others, always desiring to understand and reconcile relationships. Her joy was particularly evident when interacting with young children or when stepping on shores of lakes and oceans. Faithful to prayer, she always strived to deepen her spirituality and move even closer to God.

While reflecting on her 50th Jubilee, Sister Agnes Mary wrote: “I am grateful that God has loved me so much, and I am grateful for my community, especially my friends who have been such a source of joy in my life.”

Make a donation in memory of Sister Agnes Mary.