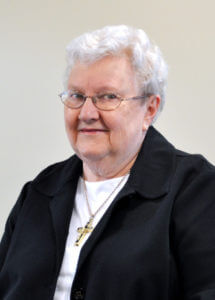 Sister Aimee Gillen, CSJ, 82, died Friday, December 29, 2017, in the 64th year of her religious life as a Sister of St. Joseph. The daughter of Raymond and Marie McNellis Gillen, Sister Aimee entered the Congregation from Our Lady of Lourdes in Altoona, PA.

Throughout a 47-year ministry in education, Sister Aimee was devoted “to teaching as Jesus did.” She taught at 13 schools in the Dioceses of Pittsburgh and Altoona-Johnstown, including Mount Gallitzin Academy in Baden (2000-2005), Good Samaritan School in Ambridge (1989-2000), and Sacred Heart School in Altoona (1971-78), where she also served as principal.

Considering it a privilege to be part of the nurturing process of her students, Sister Aimee envisioned the children as future builders of the Church and society. Describing her classroom as a model of calmness and creativity where academic standards were set high, colleagues remarked that Sister Aimee recognized and encouraged the individual gifts and talents of each of her students. She often said that teaching young children was the most rewarding experience of her religious life.

Sister Aimee most recently served as telecommunications manager at the Motherhouse, where she learned a new set of skills – managing the switchboard and overseeing “land lines” and cell phones for sisters and staff. Characterized as generous, faithful, gentle and humble, Sister Aimee immersed herself in a life of deep prayer. Conscious of her commitment to the Sisters’ spirit of unity and reconciliation, she said during her 50th Jubilee celebration: “God works in my life daily through the Liturgy and the reception of the Eucharist. This form of communal prayer and personal prayer enables me to live my life in the presence of God.”

An avid Notre Dame football fan, Sister Aimee appreciated classical music and often played the piano at Liturgy. It’s no wonder that her favorite hymn, “We Are Called,” inspired Sister Aimee to “act with justice . . . love tenderly . . . serve one another . . . to walk humbly with God.”

Make a gift in memory of Sister Aimee.