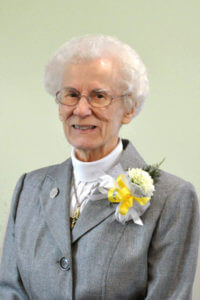 Sister Alberta Grimme, CSJ, 97, died Thursday, October 27, 2016, in the 79th year of her religious life as a Sister of St. Joseph. The daughter of Herman and Myrtle Gartland Grimme, Sister Alberta entered the Congregation from St. Mark Parish, Altoona, PA.

For nearly 60 years, Sister served as a teacher in the dioceses of Pittsburgh, Altoona-Johnstown and Greensburg. She primarily taught first- and second-graders in schools that included Holy Name in Ebensburg (1977-89), St. Titus in Aliquippa (1967-77), and St. Bernard in Pittsburgh (1960-66). She often expressed how she “dearly loved teaching” these grades, especially preparing the “little ones” for their First Holy Communion.

Sister also spent five summers at St. Joseph Infant Home in Ebensburg where she helped tend to the needs of babies and young children. Following her education ministry, Sister Alberta cared for her youngest sister, Janie, until her death. One of 10 children, she followed her oldest sister (Mary Albert) into the Congregation.

Described as quiet, calm and pleasant, Sister Alberta had a great devotion to the Presence of Jesus in the Blessed Sacrament and typically spent an hour in Chapel before daily Mass. She felt very privileged when she came to Baden in 2007 and was assigned to take Communion to sisters with physical limitations. With a gentle and faithful spirit, Sister Alberta would often say, “The longer you live, the more you grow in faith.”

A sign on the door to her room reads, “Sister Alberta’s Sewing Shoppe . . . I’ll keep you in stitches.” Taught the craft by her mother and grandmother, Sister Alberta, an accomplished seamstress, made hundreds of habits for sisters on weekend breaks from teaching. Up until recently, she continued to expertly alter or mend clothes for sisters and friends. Sister enjoyed listening to classical music, especially Beethoven and Mozart, and reading historic novels.While celebrating her 75th Jubilee, Sister Alberta shared a quote from Bishop David Zubik as her daily inspiration: “Always treat others as if they are Christ; always treat others as if you are Christ.”

Make a donation in memory of Sister Alberta.