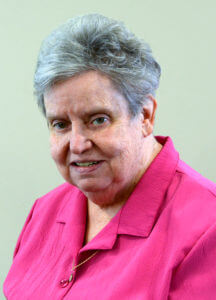 Sister Ann Zita (Zita Marie) McLaughlin, CSJ, 77, died Friday, March 22, 2019, in the 60th year of her religious life as a Sister of St. Joseph. The daughter of the late Francis and Zita Hobbins McLaughlin, Sister Ann Zita entered the Congregation from St. Mary parish in Lawrenceville.

After serving seven years as a teacher in the Dioceses of Altoona-Johnstown and Pittsburgh, Sister Ann Zita began a nursing ministry in 1972 that spanned three decades. She served as a staff nurse at St. Joseph, Jefferson, West Penn, and St. Francis hospitals. From 1986 to 1990, Sister Ann Zita was a nurse in the convent’s infirmary. In 1993, she began a five-year ministry with the Visiting Nurses Association (VNA) and continued to offer home nursing care both through UPMC and at private residences.

From 2006 to 2009, Sister Ann Zita was program director for activities and switchboard operator at the convent. In recent years, she was coordinator of the Book Nook gift shop at the Motherhouse. Her compassion and concern for the elderly, particularly those who were sick, began to develop at a very early age when she was surrounded by aging grandparents, other relatives, and neighbors to whom the family often reached out to serve.

Her personal experience with the compassion of Jesus, she related recently, nurtured her ever-deepening desire to relate to others in the same manner. Sister Ann Zita said she appreciated the opportunity to care for patients in their own environment where she also could be present to family members. “It is rewarding to help someone in need and I am dedicated to the call of helping others, conscious always of the needs of the ‘dear neighbor’.”

Always ready with a generous smile, a helpful hand, and a light-hearted spirit, Sister Ann Zita celebrated holidays in style and spawned lasting friendships. While working for the VNA, Sister Ann Zita was among a group of nurses who began cross-stitching together and subsequently gathered regularly to share a meal, support and encouragement. On her Golden Jubilee, she reflected, “I have been blessed in many ways, and my education and spiritual growth have come from living in community.”

Make a donation in memory of Sister Ann Zita.