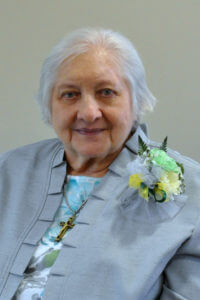 Sister Barbara (Michael) Sandor, CSJ, 83, died Wednesday, December 21, 2016, in the 65th year of her religious life as a Sister of St. Joseph. The daughter of Michael and Anna Semens Sandor, Sister Barbara entered the Congregation from Holy Rosary Parish in Pittsburgh.

Following her teaching ministry, Sister Barbara held several secretarial positions, including at the Diocese of Pittsburgh Religious Education Learning Media Center, Good Samaritan, Annunciation, Duquesne University and Mercy Hospital. From 2006-2012, she served as a volunteer visitor at Villa St. Joseph where she has resided for the past four years, participating in the Villa Voices, Bell Choir, and Pets with Heart therapy.

During her 50th Jubilee celebration, Sister Barbara Sandor shared that her first encounter with the Sisters of St. Joseph was not in a classroom, but rather at her family’s home where she witnessed first-hand how the Sisters faithfully and cheerfully visited an elderly homebound woman who lived upstairs. “I never could have dreamed as a little girl that I would someday become one of them,” said Sister Barbara who was educated in public schools. “I am always grateful to be a sister – especially a Sister of St. Joseph.”

The cheerful spirit of the Sisters, which Sister Barbara admired as a young girl, carried into her own ministry as a companion to the sick and elderly at the Motherhouse infirmary and later at the Villa. An avid singer, she enjoyed singing church music and inspired others to raise their voices, too. Whether in music or ministry, Sister Barbara often referred to her favorite Scripture message, “Lift your heart to God.”

Make a donation in memory of Sister Barbara.