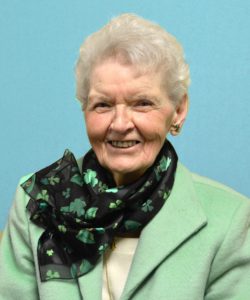 Sister Bridget James O’Brien, 90, died Sunday, October 20, 2019, in the 70th year of her religious life as a Sister of St. Joseph. The daughter of James and Bridget Mannion O’Brien, Sister Bridget James entered the Congregation from St. Veronica Parish in Ambridge, PA.

For 42 years, Sister Bridget James ministered in education in the dioceses of Pittsburgh and Altoona Johnstown. She served 11 years as a teacher, including at St. Joseph in New Brighton (1957-60), St. Mary in New Castle (1960-62), and St. Catherine in Pittsburgh (1962-64). For more than three decades, she served as principal of St. Andrew in Johnstown (1964-1995) where she was beloved by generations of former students.

When completing her tenure, she told a reporter, “We must help our children discover their own worth and dignity as they come to see themselves through the eyes of God.” Describing her as a “nun first and a teacher second,” the pastor said, “Her faith and understanding of human nature [have] endeared her not only to the hearts of the children but the parents as well.”

Animated by a warm smile and soft laugh, Sister Bridget brought her welcoming spirit to the Motherhouse where she ministered as Coordinator (1995-2004) and Minister of Hospitality (2005-17). Her loving outreach to visitors and staff often included a pleasant conversation, a promise of prayers, and a reminder to trust in the Infant Jesus, to whom she had great devotion. Sister Bridget also served as Sacristan (2010-17), considering it a profound privilege to care for the altar and be in the presence of the Eucharist. Several years ago, she traveled to Dublin to attend the International Eucharistic Congress in Dublin, calling it a highlight of her life.

Sister Bridget once described her life as a “Divine Symphony” in four movements. She said it opened with the delightful singing violins of her Irish family full of love and laughter, moved into the somber beat of a family tragedy, rose to the sound of a full orchestra at St. Andrew’s, and finally moved into the soft rhythmic melody of ever-deepening faith and love for God. Each day, she prayed to know God’s will for her.

Donations in the name of Sister Bridget James may be sent to the Sisters of St. Joseph Memorial Fund, Development Office, 1020 State St., Baden, PA, 15005.

Make a gift in memory of Sister Bridget James.