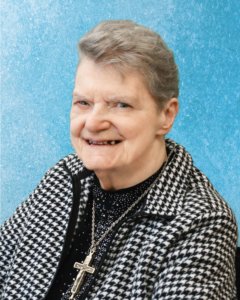 Describing her ministry of teaching elementary students – mostly first-graders – as “a joy, not a job,” Sister Callista brought enthusiasm and zeal into the classroom, cheerfully instructing her students and helping them to believe in themselves. While serving at MGA, she was nominated by students and peers for the “Golden Apple” award of excellence. “Sister Callista never gave up on me. She is the perfect example of a teacher to me,” a third-grader wrote. While Sister Callista said “God frequently touched me” through the smiles of small children, it was her endearing smile, joy and compassion that not only impacted her students, but also those whom she encountered.

While recently celebrating her 70th Jubilee, Sister Callista recalled how she set aside her childhood dreams of calling professional baseball games to follow God’s call into religious life. She remained, though, a faithful sports fan who rooted for Ohio State and the Pittsburgh Pirates. Sister Callista also enjoyed puzzles, mystery novels, and most of all, time spent with other Sisters and Motherhouse staff. “It’s the relationships that bring me great joy, and make me a better person,” she said, grateful to live each day from “the gift of God’s love.”

Predeceased by two brothers (John Williamson and Richard Williamson) and two sisters (Dolores Reiter and Ruth Shaffer), Sister Callista is survived by numerous nieces, nephews, grand-nieces, grand-nephews, Associates, and the Sisters of St. Joseph of Baden. The Sisters are grateful to the Supportive Living staff at the Motherhouse for their care of Sister Callista.

Friends will be received Monday, September 12, to the close of the Prayer Vigil, which begins at 6 p.m., and Tuesday, September 13, from 11 a.m. to 3:30 p.m. in Medaille Hall at the Motherhouse of the Sisters of St. Joseph.

Mass of Christian Burial will be offered Tuesday, September 13, at 4 p.m.  in the Motherhouse Chapel. All visitors who enter the Motherhouse are required to show proof of vaccination.

Donations in the name of Sister Callista may be sent to the Sisters of St. Joseph Memorial Fund, Development Office, 1020 State St., Baden, PA, 15005.

Make a donation in memory of Sister Callista.