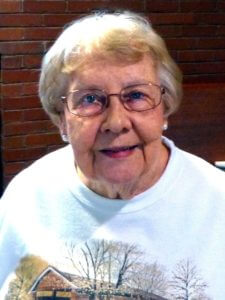 Sister Diane (Emmanuel) McCalley, CSJ, 79, died Sunday, January 22, 2017, in the 59th year of her religious life as a Sister of St. Joseph (since 1980) and a Benedictine sister (1958-79). The daughter of Chester L. and Celia Castrodale McCalley, Sister Diane entered the Congregation from Nativity Parish in Pittsburgh.

Sister Diane once described her monastic foundation as a Benedictine Sister and her apostolic ministry as a Sister of St. Joseph as “two great gifts from God.” During her 50th Jubilee, Sister Diane said it was the Congregation’s charism of loving the dear neighbor, living non-violently and commitment to healing and reconciliation that drew her “home.” She wrote: “It is thrilling to me that the Sisters of St. Joseph of Baden, who were responsible for my Baptism at age 7, embraced me again at age 43 to live out with them these values. This is the cause of the deepest joy in me.”

As a Benedictine sister, Sister Diane served as a high school music teacher (1960-72) and unit manager at the Ebensburg Center where she developed the first Department of Pastoral Care (1972-80). As a Sister of St. Joseph, Sister Diane enhanced her music education with a degree in theology, paving the way for chaplaincy and pastoral care ministries. She served as Chaplain Resident at Allegheny General Hospital (1989-91) and Coordinator of Pastoral Care Services at Mercy Psychiatric Institute (1991-97), both in Pittsburgh, and Director of Pastoral Care at Genesis Health Care System (2001-06) in Zanesville, OH. She most recently served as Pastoral Associate in Wheeling, WV, parishes of Corpus Christi (2001-2005) and St. Vincent de Paul (2006-2012).

For nearly 20 years, Sister Diane, a long-time spiritual director, helped to plan the annual Women’s Spirituality in the Workplace weekend retreat at St. Joseph Spirituality Center, most recently partnering with Associates of the Sisters of St. Joseph. She cherished her relationship with the Associates whom she said bring “a source of new life” to the Congregation. Sister Diane deeply valued her friendships as much as the solitude of the mountains of West Virginia, which were often the backdrop for walking or reading the works of Thomas Merton.

She said her deep faith carried her “without fear through unchartered territories” and allowed her to fully embrace endings, transitions and new beginnings. Through ministry and music, Sister Diane said that she was abundantly blessed by the many opportunities every day “to love people and try to see them as Jesus does.” A gifted pianist, Sister Diane served as Worship Coordinator at the Motherhouse since 2014. In a 2008 reflection, she wrote: “To express myself and my love of God in music in worship is one of the points of beauty in my life.”

Make a gift in memory of Sister Diane.