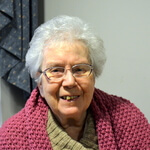 Sister Dolorosa Kleinman, CSJ, 98, died February 2, 2018 in Villa St. Joseph in the 79th year of her religious life as a Sister of St. Joseph. Sister Dolorosa, the daughter of Bernard and Georgia Vogel Kleinman, entered the Congregation from Holy Rosary Parish in Pittsburgh, PA.

She ministered more than 50 years in education in the Dioceses of Pittsburgh, Altoona-Johnstown and Greensburg. During her longest tenures, Sister Dolorosa served as principal at St. Charles in Donora (1960-65) and St. Titus in Aliquippa (1965-79), and as a teacher at Nativity in Pittsburgh (1980-86) and St. Bernard in Pittsburgh (1986-1991). She continued her education ministry as a volunteer tutor at St. Bernard and a teacher at Northview Heights Learning Club in Baden.

After moving to the Motherhouse in 1997, Sister Dolorosa volunteered as a caregiver for Sisters in supportive living. Described as a sensitive and caring teacher, Sister Dolorosa greeted all with a warm and welcoming smile and was beloved in the parishes and communities where she served.

When she retired from teaching at St. Bernard, Sister Dolorosa’s service was acknowledged in the parish bulletin: “She portrayed the ‘Jesus’ that was the essence of the lessons taught. Her love, compassion, faith, understanding, justice and gentleness caused the words of scripture to ‘come alive’.” In 1979, Sister Dolorosa was honored by the Aliquippa Blue Ribbon Committee “in recognition of her dedication and outstanding service to the community.”

Sister Dolorosa followed her sister (Sister Mary Oliver) into religious life. “Her happiness and love of religious life greatly influenced me. One of the greatest joys of my religious life is sharing that life with my sister for many years,” Sister Dolorosa recalled at her retirement. Once reflecting on her long and loving service, she said, “I have been blessed in many ways and for these many blessings I can only say ‘thanks’ to my God.”

Make a gift in memory of Sister Dolorosa.