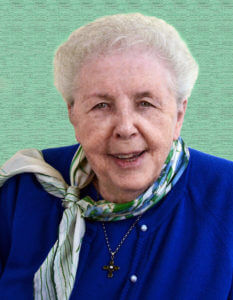 Surrounded by a musical family, Sister Donna Marie began playing the organ at daily Mass from the time she was 12 years old. Before pursuing music therapy studies in the 1970s, Sister Donna Marie was a music teacher in the Diocese of Pittsburgh schools, including St. Veronica, St. Raphael and Mon Valley high schools and Fontbonne Academy. While teaching, Sister Donna Marie also directed music sessions for nurses at St. Joseph Hospital.

Sister Donna Marie was at the forefront of music therapy for more than 30 years. Under her leadership, Duquesne strengthened its national reputation in the field. Her scholarship in such areas as spirituality and guided imagery has been widely published and acclaimed for expanding the frontiers of a relatively young discipline, and her advocacy has resulted in the expansion of music therapy services throughout the Pittsburgh area’s health care facilities, from children’s hospitals to residential homes for the elderly. Sister Donna Marie conducted music therapy workshops and seminars nationally and internationally and has received numerous honors including the Lifetime Achievement Award from the American Music Therapy Association.

Just last year, Sister Donna Marie re-connected with nearly 50 former students and colleagues at a music therapist conference in Pittsburgh where many described her radiant spirit, humble and infinite wisdom, open heart and quiet strength. Her greatest tribute is the generations of students who became her colleagues and the thousands of lives that she has transformed through music. “Preparing young people to be compassionate and competent music therapists has been a beautiful blessing for me,” she said. “Music has truly been a servant source in my own spiritual growth as well as that of my students.”