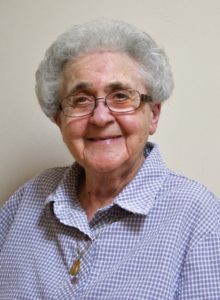 Sister Dorothy (Nicholas) Antonazzo, CSJ, 90, died May 12, 2018, in her 72nd year as a Sister of St. Joseph of Baden. The daughter of Nicholas and Louise Letizia Antonazzo, Sister Dorothy entered the Congregation from Our Lady of Sorrows Parish in Johnstown, PA.

Her ministry in education spanned six decades in the Dioceses of Pittsburgh, Altoona-Johnstown, Circleville, OH, Memphis, TN, and Morgantown, WV, where she served as a teacher, principal, reading coordinator and educational consultant. From 1964-1972, Sister Dorothy was the Reading Coordinator with the Anti-Poverty Program at St. Richard in the Hill District, and later at Holy Rosary in Homewood.

After serving as principal at St. Clement in Johnstown (1972-74), Sister Dorothy began a 14-year ministry as an Educational Consultant for the Diocese of Altoona-Johnstown where she teamed up with her longtime friend and co-minister, Sister Patricia Ann Foley. They continued to serve together until their retirements in 2001. Sister Dorothy was the Associate Superintendent of Schools in Memphis (1988-1991) and Assistant Principal and Guidance Counselor at St. Francis Central Catholic School in Morgantown (1991-2001).

In a farewell ceremony at St. Francis, Sister Dorothy told the students she was most proud of the school’s mission statement – To Serve, Not Be Served – because the students demonstrated that service with compassion every day. During her tenure, the school was featured in Today’s Catholic Teacher as a model of Catholic social justice teachings.

Those who knew Sister Dorothy say that she radiated the virtue of hope through her welcoming spirit, wonderful sense of humor and daily expressions of gratitude. She was devoted to her family, the Congregation and the thousands of children who played a significant role in her ministerial life. Sister Dorothy recalled that her parents initially “were not overjoyed” when, as a teenager, she expressed interest in entering the convent. “My father was totally against it . . . and my mother wouldn’t talk to me about it,” she told a reporter in 2008, adding that both soon realized “my happiness in finding the meaning of my life.”

While celebrating her Golden Jubilee, Sister Dorothy said, “What helps sustain my enthusiasm and commitment to religious life is the realization of knowing I was called by God to do his will and to teach the Word to those entrusted in my care.” To respond to that call, she often turned to her favorite passage from Corinthians: “Love bears all things, believes all things, hopes all things, endures all things. Love never ends.”

Sister Dorothy is survived by her brother Nicholas (Donna) Antonazzo, nieces, nephews, grandnieces, grandnephews, Associates, and the Sisters of St. Joseph. Friends will be received Thursday, May 17 from 1 p.m. to the close of the Prayer Vigil and Friday, May 18, from 11 a.m. to 3:30 p.m. at the Motherhouse of the Sisters of St. Joseph. Prayer Vigil will be at 6 p.m. on Thursday, May 17, at the Motherhouse. Mass of Christian Burial will be offered Friday, May 18, at 4:00 p.m. Burial will follow in the Sisters’ Cemetery on the Motherhouse grounds.

Donations in the name of Sister Dorothy may be sent to the Sisters of St. Joseph Memorial Fund, Development Office, 1020 State St., Baden, PA, 15005.

Make a gift in memory of Sister Dorothy.