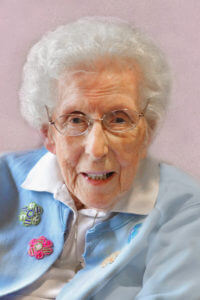 Characterized as a “great listener” and “people-person,” Sister Eileen often heard from former students who credit her for their faith and academic foundation. After decades working with children, Sister Eileen responded with grace to a new opportunity to serve seniors at Alexis Manor, an affordable housing complex in Wexford, PA. Residents and staff at Alexis Manor, where Sister Eileen served 24 years as a Manager, described her presence as gentle and caring – always patient and kind.

Whether among the young or the elderly, Sister Eileen collectively defined her ministries as “a presence for bringing God to others.” In 2013, she moved to Villa St. Joseph where she maintained a devout prayer life and a cheerful disposition. She delighted in regular visits from Buster and Luca from the Pets with Heart therapy outreach established by the sisters. Sister Eileen expressed gratitude that she was able to celebrate her 75th year as a Sister of St. Joseph during this Jubilee Year of Mercy.

Donations in the name of Sister Eileen may be sent to the Sisters of St. Joseph Memorial Fund, St. Joseph Convent, 1020 State Street, Baden, PA 15005.