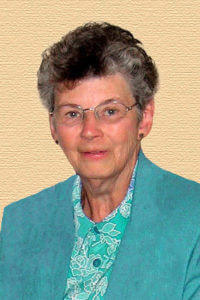 Sister Eileen Scott (Sister Mary James), CSJ, 87, died Sunday, September 17, 2017, at the Motherhouse of the Sisters of St. Joseph in her 70th year as a member of the Congregation. The daughter of Victor and Mary Friel Scott, Sister was the first of three siblings to enter the Congregation from St. Joseph Parish, Natrona.

At age 45, Sister Eileen fulfilled a lifelong dream to become a nurse when she enrolled in St. Francis Nursing School, which paved her way to nearly three decades in health care. She served as a staff nurse at St. Francis Hospital, Jefferson Center (South Hills Health System) and Allegheny County Jail, and as head nurse at the Sisters’ infirmary in the Motherhouse.

Sister Eileen’s nursing expertise and compassionate care were a blessing to the closely knit Scott family. Her siblings, Sister Jeanne and Sister Rosaleen, often expressed their loving gratitude to Sister Eileen for her long-time ministry of caring for their beloved younger brother, James, who was profoundly disabled and who passed away in 2002 at age 67.

Known for her generous spirit and kind heart, Sister Eileen attributed the faithfulness of her parents and the example of the Sisters of St. Joseph who taught her for influencing her vocation decision. “There was something about the sisters, they seemed so happy,” said Sister Eileen. “They just enjoyed each other so much.”

From 2004 to 2012, Sister Eileen volunteered at SS. Simon and Jude Parish in Green Tree in various capacities as CCD instructor, secretary in the religious education department and Sacristan. Sister Eileen often coordinated prayer requests, which she posted on her home refrigerator for frequent sibling prayer. She taught herself computer skills and did the e-mailing for her sisters. In 2012, she moved to the Motherhouse where she continued to volunteer and participate in the ministry of prayer.

As her health declined in recent years, Sister Eileen was surrounded by the constant presence and prayers of her devoted Sister-siblings. “I say, ‘Thank you, God,’ every morning,” Sister Eileen said in a recent interview. “It’s been a very fulfilling life.”

Donations in the name of Sister Eileen may be sent to the Sisters of St. Joseph Memorial Fund, Development Office, 1020 State St., Baden, PA 15005.

Make a gift in memory of Sister Eileen.