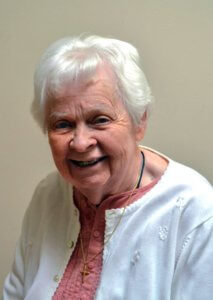 Sister Eileen (Carina) Sweeney, CSJ, 91, died Friday, February 26, 2021 in the 74th year of her religious life as a Sister of St. Joseph. The daughter of Michael and Cecilia Engle Sweeney, Sister Eileen entered the Congregation from St. Raphael Parish in Pittsburgh.

She was called in 1972 to Atlanta, GA, where she ministered eight years as secretary at St. Paul of the Cross. From 1980-1994, she served as religion teacher at St. John, Uniontown, in the Diocese of Greensburg. While teaching at St. John the Baptist in 1971, Sister Eileen was recognized nationally among Leaders of Elementary Education and cited specifically for the school’s Continuous Progress Program.

After four decades of teaching, she said, “By encouraging children to reach their fullest potential, I’ve been granted the courage to reach my own.” Sister Eileen eventually became a parish social minister and director of religious education at Ave Maria parish in Ellsworth. Wherever she taught, young children lovingly flocked to their gentle and unassuming teacher, and parishioners embraced her joy and compassion.

While she appreciated all types of music, Sister Eileen enjoyed Irish music and was known for her contagious laughter and sense of humor. In retirement as a volunteer, she brought that caring spirit and spiritual support to residents at Villa St. Joseph and patients at Good Samaritan Hospice. When unable to continue this outreach, she became a witness to her own caregivers of God’s loving and tender care.

During her Golden Jubilee celebration, Sister Eileen said her life had been challenging and fulfilling, yet she always felt God’s presence through relationships in her personal and ministry life. “My relationship with the Lord has deepened as my relationships have grown,” she said. “And that love has empowered me to reach beyond myself and into the lives of countless others.”

Predeceased by two sisters and three brothers, Sister Eileen is survived by nieces and nephews, grand-nieces and grand-nephews, Associates, and the Sisters of St. Joseph. A Memorial Mass will be scheduled at a later date. Donations in the name of Sister Eileen may be sent to the Sisters of St. Joseph Memorial Fund, Development Office, 1020 State St., Baden, PA, 15005.