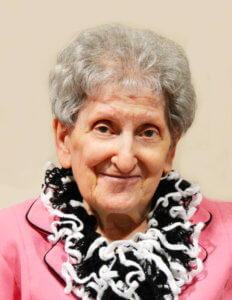 Sister Elaine (Clarita) DiZinno, CSJ, 80, died Sunday, June 28, 2020 in the 63rd year of her religious life as a Sister of St. Joseph. The daughter of Michael Archangelo and Carmellia Rose Uccellina DiZinno, Sister Elaine entered the Congregation from St. Canice in Pittsburgh.

With a natural intuition for listening to and empathizing with others, Sister Elaine served as a Hospitality and Pastoral Associate at Mercy Hospital from 1987-2013. During that time, she responded compassionately to the needs of patients and their loved ones who sought overnight respite at the hospital’s McAuley Inn. Coworkers said she had the ability to put people at ease, particularly those facing end-of-life, and to help them cope with fear, anxiety and uncertainty. An early riser, Sister Elaine was often the first person in Chapel for prayer and the first person at the hospital to greet patients arriving at dawn for surgery.

When Sister Elaine moved to the Motherhouse in 2013, she volunteered in the gift shop and participated in prayer ministry. Her quiet, unassuming demeanor was offset by her quick wit and the colorful scarves and accessories that she wore with flare. Affectionately known as “Fuzzy,” a nickname she received as a baby because of her downy hair, Sister Elaine was deeply devoted to her family and community. At her Golden Jubilee, Sister Elaine said, “In my life there are two great loves: the Sisters of St. Joseph and my whole identity as one who serves others. I remember nothing else that I wanted to be or any other place that I wanted to go, but here in this place, on this holy ground.”

Sister Elaine is survived by a sister, Catherine Holden of Pittsburgh and a brother, Ronald DiZinno (Lil) of LaQuinta, CA, nieces and nephews, grandnieces and grandnephews, Associates, and the Sisters of St. Joseph. A Memorial Mass will be scheduled at a later date. Donations in the name of Sister Elaine may be sent to the Sisters of St. Joseph Memorial Fund, Development Office, 1020 State St., Baden, PA, 15005.

Make a gift in memory of Sister Elaine.