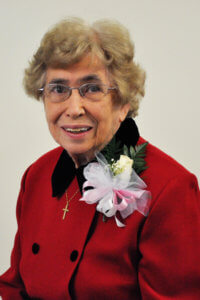 Sister Elizabeth (Mary Marcella) Shearn, CSJ, PhD, 86, died Tuesday, March 24, in the 69th year of her religious life as a Sister of St. Joseph. The daughter of Bartley and Irene Brown Shearn, Sister Elizabeth entered the Congregation from St. Raphael Parish in Pittsburgh.

From 1968-1975, she taught in elementary and secondary schools in the dioceses of Pittsburgh, Altoona-Johnstown and Greensburg. Her ministry sites included St. Patrick High School in Gallitzin (1957-1960), St. John High School in Uniontown (1961-1964), Geibel High School in Connellsville (1964-1968), and Fontbonne Academy in Bethel Park, where she served as principal from 1970 to 1976.

In 1978, Sister Elizabeth began a 34-year passion at the University of Maryland to convert what she called “math avoiders” into math learners. As Math Learning Specialist, she worked tirelessly to help thousands of students dispel their fear of math. With sensitivity and caring, Sister Elizabeth brought out the best in her students, believing that success in learning carried over into other areas of their lives.

In presentations across the country, she encouraged a “math-friendly” culture by enticing college students to become math teachers who can meet the needs of students with lower- and middle-level math abilities.  A firm but compassionate teacher, Sister Elizabeth received numerous academic awards, including three President’s Distinguished Service Award at the University of Maryland.

Creative, kind and generous, Sister Elizabeth exemplified a spirit of hospitality, building community among local Sisters and laypersons over movies, dinners and prayer. When celebrating her 50th Jubilee, Sister Elizabeth singled out her mother as her “top teacher” because she modeled a deep faith through prayers and daily Mass. She credited her father for inspiring her self-sufficiency and her knack for fixing things.  Sister Elizabeth most recently enrolled in a  “Death and Dying” course, which friends say, brought her much comfort and peace as she prepared for her own resurrection into new life.

Make a gift in memory of Sister Elizabeth.