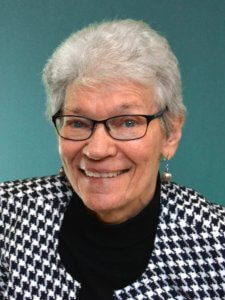 Sister Frances (Marie Elise) Omodio, CSJ, 80, died Friday, June 26, 2020 in the 63rd year of her religious life as a Sister of St. Joseph. The daughter of James Albert and Mary Seyko Omodio and one of five siblings, Sister Frances entered the Congregation from Assumption Parish in Pittsburgh.

Described as a competent and warm educator, Sister Frances recently recalled how students cheered her on when she ran the Great Race in 1985. At the time, she told a reporter: “The greatest gift is the race that is given each day to live in love of God and the neighbor.” After receiving a master’s degree in social work from Catholic University in Washington, D.C., in 1993, Sister Frances stayed in the area for the next 20 years, responding to what she said was “a deep yearning to serve in a healing profession of compassion and care.”

After serving as a case coordinator, social worker and case manager at Alexandria Mental Health Center in Alexandria, VA, Sister Frances ministered as a social worker and continuing care therapist at St. Luke Institute in Silver Spring, MD, from 1997-2013. Describing this as her longest and most revealing ministry, Sister Frances said she not only came to know God in herself, but also in those challenged with addictions whom she counseled at St. Luke. “It was the culmination of a lifetime of preparation to live out our charism of uniting neighbor with neighbor and neighbor with God,” she said during her Golden Jubilee celebration.

When she moved to the Motherhouse in 2014, Sister Frances volunteered as a grief counselor, visited residents at Villa St. Joseph, and participated in peace and justice efforts. With a wide smile and joyful disposition, she often expressed gratitude for her life, for her family, and for countless relationships – all of whom she said formed a “sacred circle” with her and God.  Inspired by her parents and the Sisters of St. Joseph at Assumption to enter their community,  Sister Frances said, “I truly believe that the whole is greater than the sum of its parts, and I wanted to be a part of the whole.”

Sister Frances had a brother, Santo (Sam) Omodio, who predeceased her, and she is survived by another brother, James Omodio of Wesley Chapel, FL; two sisters, Josephine Smith of Pittsburgh, PA, and Anna Marie Grubbs of Crescent, PA; and numerous nieces, nephews, grandnieces and grandnephews, Associates, and the Sisters of St. Joseph. A public Memorial Mass for Sister Frances will be held at a later date. Donations in the name of Sister Frances may be sent to the Sisters of St. Joseph Memorial Fund, Development Office, 1020 State St., Baden, PA, 15005.

Make a gift in memory of Sister Frances.