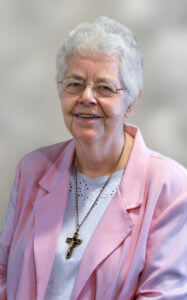 Sister Grace Marie Herrle, CSJ, 80, died Friday, July 20, 2018, in the 63rd year of her religious life as a Sister of St. Joseph. The daughter of the late Catherine and William Herrle, Sister Grace Marie entered the Congregation from Annunciation in Pittsburgh.

Sister Grace Marie served as a teacher in the dioceses of Pittsburgh, Altoona-Johnstown, Greensburg, and Miami for 26 years. Her ministry sites included St. Joseph in New Kensington (1971-1979) and Mount Gallitzin Academy in Baden (1979-1983).

After receiving a Master of Arts in Christian Ministry and Renewal at Steubenville University in Ohio, Sister Grace Marie moved into parish ministries. In the Diocese of Greensburg, she was a pastoral minister at St. Mary in Kittanning (1985-1992) and Director of Religious Education at St. Agnes in North Huntingdon (1992-1998).

For the next 15 years, Sister Grace Marie served at Our Lady of Grace in Scott Township, first as parish social minister and then as Director of Social Services. “I feel very blessed having had the opportunity to minister at Our Lady of Grace. It was one of the most vibrant parishes that I’ve worked in,” she recalled recently. At a retirement celebration for Sister Grace, the pastor acknowledged her dedicated and compassionate service in “caring for the most vulnerable among us.”

In addition to visiting frail and sick parishioners in homes, hospitals and assisted living facilities, Sister Grace Marie organized parish programs such as the festival, clothing drives for the homeless, and holiday outreach to support families in need. Following retirement, Sister Grace Marie volunteered at a food bank and at Beechview Manor, a senior housing facility in Pittsburgh, and, most recently, at the Motherhouse.

“Everything I did was directed to help and serve our dear neighbors, and in return, I received many blessings,” Sister Grace said, reflecting on the many people who touched her spirit through the years. She credited the Sisters of St. Joseph who taught her at Annunciation for influencing her vocation decision.

Born and raised in a “compassionate home” on Pittsburgh’s North Side, Sister Grace often shared a childhood memory of her mother consoling a crying young girl in their neighborhood who was upset about losing the money she was given to buy bread for the family: “We didn’t grow up rich and we lived paycheck to paycheck like many others, but I’ll never forget my mother giving that girl a dollar to buy bread.”

Donations in the name of Sister Grace Marie may be sent to the Sisters of St. Joseph Memorial Fund, Development Office, 1020 State St., Baden, PA, 15005.

Make a gift in memory of Sister Grace Marie.