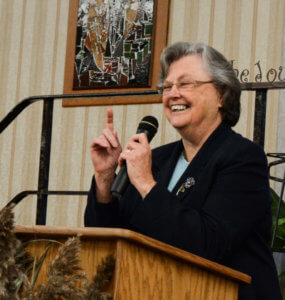 I was three years old when my older brothers began to leave home to serve in WWII. They returned home four years later, but were then men who married and began their own families. I was 23 years old, a newly professed Sister of St. Joseph, when Vatican II was convened and lived my twenties and early thirties during the Civil Rights Movement and the Vietnam War. Change became a way of life and a common maxim was “The only constant in life is change.”

I am used to living in an era of change. What is happening now is entirely different.

When I was young, there were aged structures to rail against. We fought them but deep down, we expected them to stand – change, yes – but be there for future generations. Pope Francis’ insight, however, named a reality that in its very utterance, became liberating because of the depth of truth in his statement.

We are no longer in an era of change; we are in a change of era.

Long-standing structures are collapsing. Almost every institution that held firm for centuries is giving way. They no longer can hold and sustain the consciousness that is emerging from all we are learning about God, about the universe of which we are a small and significant part, about one another. There are attempts to go back to a simpler time – in Church and Government and the Economy – to ease the pain (for a privileged few) and give simple answers to complex realities that may quell anxiety for a time. Or we move forward and embrace the times in which we live, a kind of change that happens, historians tell us, every 500 years or so.

But how do we do that? I don’t know. But I do know this. During this pandemic, I have had the privilege of directing people on retreat via zoom. I have directed retreats for over 40 years and the graces that people are receiving today are extraordinary. The proximity of God is palpable. God is everywhere and God’s Spirit is incarnated everywhere. God is in this moment and the activity of God is alive in small and significant ways to comfort and give aid, to heal and forgive; to illuminate and liberate; to send forth and accompany; to do what God always does – to give life in abundance.

In addition, Pope Francis presents us with a way through these times with a trilogy of papal documents. In his Apostolic Exhortation, The Joy of the Gospel, he focuses our attention on a missionary Church so that all may know God as infinite Goodness and unconditional Love.

In his encyclical, Laudato Si, Pope Francis urges us to care for our planet Earth as God intended, as stewards of a treasure, so future generations may enjoy its beauty and the fruits of our labor. In his most recent Encyclical, Fratelli Tutti, Pope Francis calls us to be sister and brother to one another, to reach out to those in need and labor to provide well- being for all on this small, fragile planet.

This resonates completely with my call as a Sister of St. Joseph. Our congregation was founded in 1650, in the wake of a plague that devastated France and most of Europe. Our call to let ourselves experience deeply God’s love and move always toward greater union with God, with one another and with every kind of neighbor without distinction, drawing all into union with one another is as current in our day in our global neighborhood as it was in 17th century France. That is why Pope Francis’s insight about this change of era is so compelling and so liberating. We Sisters of St. Joseph have had 370 years of preparation for this moment.

Read more reflections from our Sisters about the gifts of religious life during a global pandemic.