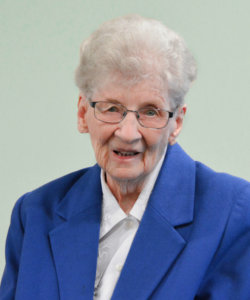 Sister Jeanne (Mary Joachim) Scott, CSJ, 91, died Saturday, May 28, 2022, in the 73rd year of her religious life. The daughter of Victor and Mary Friel Scott, Sister Jeanne was one of three siblings to enter the Congregation from St. Joseph Parish in Natrona, and the last one to enter new life with God.

From 1952 to 1966, Sister Jeanne taught at various schools in the Dioceses of Pittsburgh and Altoona-Johnstown, including St. Thomas More in Bethel Park, St. Raphael High School in Pittsburgh; St. Brigid in Lilly, and St. Veronica High School in Ambridge.

Sister Jeanne subsequently became a high school guidance counselor, serving at Bishop Carroll (1966-68, 1972-74) in Ebensburg, Greensburg Catholic (1968-71) in Greensburg, and Cathedral Catholic/Oakland Catholic (1986-90) in Pittsburgh. From 1974 to 1982, Sister Jeanne was Director of Employment and Training at the Ebensburg Center. She was principal at St. Margaret Mary (1983-84) in Lower Burrell and interim principal at North Catholic High School (1993-94) in Pittsburgh. She continued ministry at North Catholic until 1997, serving as Director of Campus Ministry and Student Advocate.

Beloved by parishioners at SS. Simon and Jude in Scott Twp., Sister Jeanne most recently devoted 18 years of ministry to the parish/school as Director of Religious Education and Literature Coordinator, faith formation teacher, and volunteer religion teacher for preschoolers who referred to her as “the lady who knows God.”

In 2012, Sister Jeanne returned to the Motherhouse in Baden where she volunteered in the Congregation’s Development Office and at Villa St. Joseph and served as a Eucharistic Minister. With a contagious smile and spirit, Sister Jeanne exuded the joy and kindness that she so admired in the Sisters of St. Joseph who taught her. “I wanted to be just like them,” she recalled in 2019 when the Scott Sisters were honored by their alma mater, St. Joseph High School in Natrona.

Inspired by the faith of her loving parents, Sister Jeanne said they taught her “how to pray, how to be calm, how to laugh, and how to care for others,” especially their profoundly disabled son, James. “I learned from my parents that God is with me in all that I do each and every day,” she reflected, adding that her task in life is to “find out who I am, why I was created, and to keep being that person God wants me to be.”

Friends will be received Thursday, June 2, from 1 p.m. to the close of the Prayer Vigil, which begins at 6 p.m., and on Friday, June 3, from 11 a.m. to 2:30 p.m. in Medaille Hall at the Motherhouse of the Sisters of St. Joseph. Mass of Christian Burial will be offered Friday, June 3, at 3 p.m. in the Motherhouse Chapel. All visitors who enter the Motherhouse are required to show proof of vaccination. Donations in the name of Sister Jeanne may be sent to the Sisters of St. Joseph Memorial Fund, Development Office, 1020 State St., Baden, PA, 15005.

Make a donation in memory of Sister Jeanne.