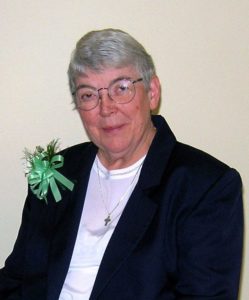 Sister Jeanne (John Vianney) Solari, CSJ, 87, died Sunday, February 18, 2018, in Richmond, VA, in the 71st year of her religious life as a Sister of St. Joseph. The daughter of the late Joseph and Katherine Miller Solari, Sister Jeanne entered the Congregation from St. Paul Parish in Richmond, VA.

Sister Jeanne served as a teacher for 23 years in the Pittsburgh, Altoona-Johnstown, and Greensburg dioceses in Pennsylvania, and in the Atlanta, Georgia, diocese. In 1957, she was among the first group of Sisters of St. Joseph to travel to Atlanta to open St. Paul of the Cross, a school for African-Americans. A few years ago, Sister Jeanne re-connected with one of her former students who earned degrees in law and medicine and who credited her for influencing his career and faith life.

In 1974, her ministry called her to Maryland where she served as a school counselor for the next 20 years. In 1994, Sister Jeanne served as a receptionist at St. Bridget Parish in Richmond, VA, and eight years later, began volunteering as a pastoral care visitor at the parish. While in Richmond in the early 2000s, she also served as president of Senior Friends, a volunteer organization, at Henrico Doctor’s Hospital-Forest & Parham.

Friends say that Sister Jeanne, who was born in Richmond, exuded the warm and gentle spirit of the South in her words and in actions. Described as calm and kind, Sister Jeanne was deeply devoted to her family, friends and parish. Her faithful dogs, Skippy and Marcy, were her constant companions.

Donations in the name of Sister Jeanne may be sent to the Sisters of St. Joseph Memorial Fund, Development Office, 1020 State St., Baden, PA, 15005.

Make a gift in memory of Sister Jeanne.