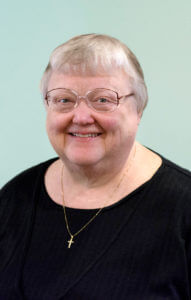 Sister Marguerite (Stephen Marie) Kropinak, CSJ, 69, died Friday, April 7, 2017, in the 52nd year of her religious life as a Sister of St. Joseph. The daughter of Stephen and Evelyn Michaux Kropinak, Sister Marguerite entered the Congregation from St. Mary in Kittanning. While young, she says she experienced a call from God to be a sister, and the loving Sisters of St. Joseph in her parish and her caring parents nurtured that call.

Following a two-year ministry in education at St. Titus in Aliquippa (1970-71) and Fontbonne Academy in Bethel Park (1971-72), Sister Marguerite earned a Master of Social Work from the University of Pittsburgh, a Master of Theology from Duquesne University, and a Doctor of Divinity from the Pittsburgh Theological Seminary. This academic background set the stage for Sister Marguerite’s more than 40 years of service as a social worker, therapist, parish social minister, and spiritual director to the most vulnerable of God’s people.

Sister Marguerite served as a social worker for Catholic Family Services of the Archdiocese of St. Louis (1974-75), regional supervisor for the Diocese of Greensburg (1977-81), Family Life Minister at St. Bernadette (1981-84) in Monroeville, therapist for Pittsburgh Pastoral Institute (1985-2017), and Parish Social Ministry director for Catholic Charities of the Diocese of Pittsburgh (1992-98).

Following a five-year tenure on the Congregation’s Leadership Team, Sister Marguerite was instrumental in the establishment of St. Joseph Spirituality Center in 2003 and, since then, has served as its Director. Known for her compassion, creativity and organizational skills, Sister Marguerite has responded to the needs of people who feel the pain of isolation or face crisis situations. “It’s a wonderful grace to grow in relationships with the dear neighbor,” she said while celebrating her 50th Jubilee.

In the 1980s, Sister Marguerite reached out to gay and lesbian Catholics, offering them spiritual support and presence, and advocated for government funding for AIDS research and health care. In 2004, she organized a collaboration of churches and social services agencies to assist Etna residents in the aftermath of a disastrous flood. For her volunteer efforts, Sister Marguerite was presented “A Service above Self” award from the McCandless Rotary and certificates of appreciation from county and state officials. She also served as a member of the Behavioral Health Crisis Response Consortium in Pennsylvania.

Sister Marguerite, who often expressed her love for the Congregation, had a keen sense of humor and a zest for life. “As I experience the reality of people’s lives and of our world today, I appreciate the need for our charism of union – of people within themselves and with each other, with all of creation and all with God,” she said recently.

Donations in the name of Sister Marguerite may be sent to the Sisters of St. Joseph Memorial Fund, Development Office, 1020 State St., Baden, PA 15005.

Make a gift in memory of Sister Marguerite.