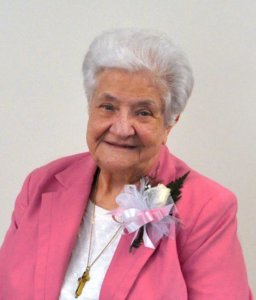 She served four decades as a teacher in the dioceses of Altoona-Johnstown, Pittsburgh, and Greensburg. Her longest-serving ministries took place at Holy Rosary in Pittsburgh (1956-61), St. Mary in Kittanning (1967-75), and St. Andrew in Johnstown (1976-95).

In 1969, Sister Marie Bernard participated in a national movement called House of Prayer, which was designed to strengthen personal and communal prayer. While at St. Mary she was selected as a 1975 Outstanding Elementary Teacher of America. The principals who supervised Sister Marie Bernard marveled at how she creatively inspired young students with her resourceful style of teaching. Whether engaging them in a lesson on the floor, comforting them in a rocking chair, or telling them a parable, Sister Marie Bernard produced excellent academic and spiritual rewards for her students.

“The children were always my first priority,” she said, reflecting on her Golden Jubilee. “They tell me in their later years that the beliefs and basic formation of the Catholic faith that were instilled in them at an early age still exist today.”

Following classroom teaching, Sister Marie Bernard ministered as a CCD instructor at St. Elizabeth Seton in Windber and, later, as caregiver to her ailing mother. When she returned to Baden in 2002, Sister Marie Bernard continued this spirit of caring at the Motherhouse where she visited and prayed with Sisters who were in the infirmary. Close friends said Sister Marie Bernard blossomed from a quiet novice into a people-person known for her gentle and pleasant disposition.

Sister Marie Bernard is survived by a brother, Francis (Jackie) Martino of Mechanicsburg, PA, a sister-in-law, Bev Martino of Mentor on the Lake, OH, a cousin, a niece and two nephews, Associates, and the Sisters of St. Joseph.

The Sisters are grateful to the Supportive Living staff at the Motherhouse for her care. A Memorial Mass will be scheduled at a later date. Donations in the name of Sister Marie Bernard may be sent to the Sisters of St. Joseph Memorial Fund, Development Office, 1020 State St., Baden, PA, 15005.

Make a donation in memory of Sister Marie Bernard.