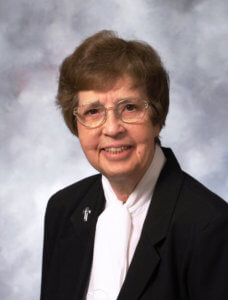 Sister Marilyn Washington, CSJ, 78, died, Friday, November 13, 2020 in the 62nd year of her religious life as a Sister of St. Joseph. The daughter of Leonard and Aretta Schenk Washington, Sister Marilyn entered the Congregation from Holy Name parish in Ebensburg, PA.

Sister Marilyn taught in Pittsburgh and Altoona-Johnstown diocesan schools that included St. Andrew in Johnstown (1964-66), St. Joseph in New Kensington (1966-72) and Mount Gallitzin in Baden (1972-80) where she also directed band and conducted private music lessons. From 1980 to 2000, Sister Marilyn served at the Motherhouse in a variety of ministries such as Director of Personnel, Assistant Coordinator, and Telephone Systems Manager. She worked tirelessly to nurture relationships and raise funds in her roles as chairwoman of the annual Harvest Festival and advisor to the Sisters of St. Joseph Auxiliary.

Without formal training, Sister Marilyn in 2000 fully embraced a new 16-year ministry as a Co-Manager of Clairvaux Commons, a senior high-rise in Indiana, PA. Conscientious and meticulous about her work, Sister Marilyn willingly engaged in learning new administrative skills while also showing warmth and compassion to the senior residents.

A graduate of Mount Gallitzin High School, Sister Marilyn was regarded by classmates as their faithful friend and spiritual connection to the Congregation. She was described as the “hub” of her family, and was often called upon to care for her brother with special needs. Quiet and gentle, Sister Marilyn fostered long-time relationships, regularly corresponding in beautifully written messages.

During her Golden Jubilee, Sister Marilyn expressed gratitude for the privilege of “sharing the love of Christ” with all those whom she encountered. “I believe that God gives me strength and grace to carry his love to those I meet or help each day. My ministry is to share Christ’s cup with others by my actions,” she said.

The Sisters are grateful to the Supportive Living staff at the Motherhouse for their care of Sister Marilyn. A Memorial Mass will be scheduled at a later date. Donations in the name of Sister Marilyn may be sent to the Sisters of St. Joseph Memorial Fund, Development Office, 1020 State St., Baden, PA, 15005.

Make a donation in memory of Sister Marilyn.