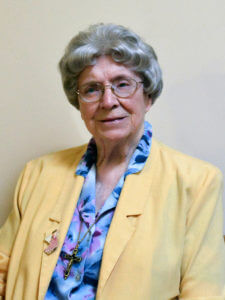 Sister Marion (James) Corrigan, CSJ, 93, died Thursday, August 30, 2018, in the 74th year of her religious life as a Sister of St. Joseph.  The daughter of the late Thomas and Marion Bigley Corrigan, Sister Marion entered the Congregation from St. Bernard Parish in Mount Lebanon, PA.

For more than 50 years, Sister Marion was a primary teacher in the Dioceses of Pittsburgh, Altoona-Johnstown, and Greensburg.  Described as a “master teacher,” Sister Marion said she “wanted to make God real for little ones.” Sister Marion was among three Sisters of St. Joseph who opened Our Lady of Victory School in State College, PA, in 1963. She served there until 1970.

More than two decades later, Sister Marion and her beloved twin,  Sister Rita, were instrumental in opening St. Mary’s preschool in Kittanning, and both served there until retirement in 2000. They fostered a child-centered approach to learning that focused on the physical, social, emotional and cognitive wellbeing of each child. Sister Marion’s education ministry sites also included St. John in Johnstown (1952-56), St. Aloysius in Dunbar (1959-63), St. Clement in Johnstown (1970-76), and St. Bede in Pittsburgh (1978-1991).

When she “retired” to the Motherhouse in 2000, Sister Marion, with her pleasant and engaging manner, volunteered at Villa St. Joseph, Girls Hope, St. Joseph Spirituality Center, and the Congregation’s Development Office. Known for her heartfelt letter-writing to donors, Sister Marion once said, “One of the great gifts of this ministry is to be able to tell them how much we appreciate their generosity and support of us, and to let them know that we are praying for them.”

Sister Marion had a zest for life, which was nurtured by a loving and close family, and a zeal for mission, which was rooted in a deeply spiritual life.  In encounters with Sister Marion, there was often a promise of prayers, a fascinating story, or an offer to help.

Donations in the name of Sister Marion may be sent to the Sisters of St. Joseph Memorial Fund, Development Office, 1020 State St., Baden, PA, 15005.

Make a gift in memory of Sister Marion.