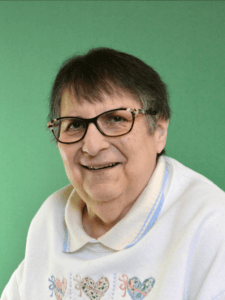 Sister Mary Anne earned her second master’s degree in pastoral studies at Loyola University in 1985 which opened the door to a 27-year ministry as a chaplain at Rush-Presbyterian-St. Luke’s Medical Center in Chicago, IL, (1985-86); St. Agnes Medical Center in Fresno, CA, (1987-2003); and Central California Women’s Facility in Chowchilla, CA, (2006-17).

While reflecting on her service as a prison chaplain, Sister Mary Anne said that she came to learn that “being welcoming and fully present” can often transform feelings of anger and fear in the women who feel unloved. Her most challenging conversations were those with women on death row. Espousing a “mind, body, spirit” approach to her ministry, Sister Mary Anne encouraged creative activities that she said allowed the incarcerated women to express their feelings in writings or artwork. She often dipped into her personal funds to purchase paper, crayons or paint supplies.

During Holy Week in 2006, Sister Mary Anne wanted the prison choir to look and feel special so she purchased discounted T-shirts that were designed with colorful candies and the message, “Jesus is My Life Saver.” The shirts were so popular that more women wanted to join the choir. Any affirmation of her outreach – whether just a simple smile or thank-you from the women – was like “the Resurrection after the long passion,” she described.

Sister Mary Anne credited the hospitality of the Sisters of St. Joseph for influencing her decision to enter religious life. “It was the opportunity to spend time with the sisters, and the invitation to join in prayer and retreats at the Motherhouse where I received the message, ‘Go to Joseph’.”

Predeceased by a sister, Gloria Jean Healey, and a brother, Dominic J. Vera, Sister Mary Anne is survived by her stepmother, Mary C. DiVincenzo of Melbourne, FL, a brother, Carl J. (Jill) DiVincenzo of Harrisburg, PA, nieces and cousins, Associates, and the Sisters of St. Joseph.

Make a donation in memory of Sister Mary Anne.