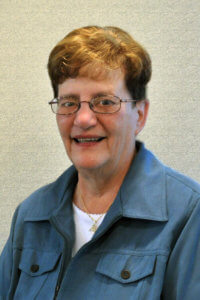 Sister Mary Catherine (Simeon) Cudnik, CSJ, 75, died Wednesday, August 26, 2020, in the 44th year of her religious life as a Sister of St. Joseph. The daughter of Stanley and Helen Elias Cudnik, Sister Mary Catherine entered the Congregation from St. Aloysius in Dunbar, PA, where she first taught religious education at the parish school and then at Holy Rosary in Pittsburgh.

Sister Mary Catherine served as Director of Religious Education at St. John in Uniontown (1982-83), Nativity in Pittsburgh (1983-85) and Our Lady of Peace in Conway (1985-91). For the next four years, she was Liturgist at the Motherhouse, transitioning into a long-time, beloved ministry in pastoral care serving hospital and hospice patients and their families. After serving as pastoral minister at St. John the Evangelist in Latrobe, Sister Mary Catherine became a chaplain at Westmoreland Regional Hospital in Greensburg (1995-2003) and at Mother Teresa Hospice in Monaca (2004-2017).

Sister Mary Catherine, whose gentleness and compassion came naturally, recalled that she originally resisted the “invitation” to become a chaplain. After witnessing the prolonged suffering of her father who had cancer, she convinced herself that she could not endure the pain and suffering of others in similar situations.  But a change of heart and God’s “second invitation” prevailed.

Known as Sister “Cacky,” she credited her parents for modeling care and concern for others and for inspiring her to daily serve the ‘dear neighbor.’ While reflecting on her ministry, she said, “Each day, each experience is different. In the midst of suffering, you are bringing them to a place where they are often trying to reconcile with themselves, with their families and with God.”

An attentive listener with a compassionate heart, Sister Mary Catherine often stayed in touch with grieving family members long after losing a loved one. While she easily connected with the elderly and the sick, she also cherished her time with youth, particularly at Girls Hope where she volunteered. Deeply devoted to her family, Sister Mary Catherine relished boisterous, fun-loving family gatherings.

Sister Mary Catherine is survived by three sisters, Rose (late Richard) Carbonara and Rita (Richard) Sidow, both of Connellsville, PA, and Patricia Brown of Dunbar, PA; a brother, Stanley (Cindy) Cudnik of Dunbar, PA; nieces and nephews, and grandnieces and grandnephews, the Associates, and the Sisters of St. Joseph.

Make a donation in memory of Sister Mary Catherine.