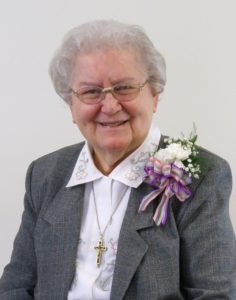 Sister Mary Dominic Ravotti, 94, died Wednesday, September 18, 2019, in the 70th year of her religious life as a Sister of St. Joseph. The daughter of Domenick and Theresa Fassio, Sister Mary Dominic entered the Congregation from St. Catherine Parish in Leechburg, PA.

For nearly 30 years, she served as a teacher in the Dioceses of Pittsburgh, Greensburg and Miami, including a nine-year tenure at Blessed Sacrament in Natrona Heights (1975-1979, 1986-1991). She ministered the next eight years at St. Mary in Kittanning, first as a teacher (1991-1994) and then as pastoral associate (1995-1999). In a farewell tribute to Sister Mary Dominic, the pastor at St. Mary wrote: “If any help was needed, Sister Mary (Dominic) was on the spot, working quietly and not wanting to be recognized. Her warm smile, gentleness and kindness were always with her.”

Sister Mary Dominic’s gracious and unassuming demeanor belied her sense of adventure. At the urging of her brother, a Navy pilot, Sister Mary Dominic earned a pilot’s license in hopes of facilitating her travel through the remote, dense jungles of Borba, Brazil, where she served as a missionary from 1967 to 1975. While training on a Piper Cub at Leechburg Airport, she lightheartedly told a reporter, “I’m having a terrific time. It’s all going very well except for the landing.” While she lobbied intensely for the Brazilian government to build a landing strip near the mission site, it never came to be during her stay.

In 1979, Sister Mary Dominic expressed a deep desire to return to missionary work as a teacher, and, subsequently, served in Liberia, Africa, from 1979-1982. Prior to leaving, she mused, “Children are the same all over the world. Working with them doesn’t really take much of an adjustment.” When Sister Mary Dominic moved to the Motherhouse in 1999, she joined the outdoor maintenance and transportation staff.

Make a donation in memory of Sister Mary Dominic.