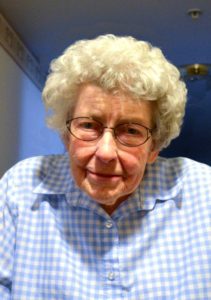 For more than 25 years, she taught at Pittsburgh Diocesan schools, including Nativity School (1965-71) and St. Titus (1949-54). She also served at St. Andrew School in Columbus, OH, and St. Paul of the Cross School in Atlanta, GA. Following a year as a Social Service Minister in Tarentum, Sr. Mary Eileen served for 15 years as an Interviewer for the PA Bureau of Employment Security. From 1990-2000, Sister co-managed Clairvaux Commons in Indiana, PA, and then moved to the Motherhouse.

With a welcoming spirit, she served as the long-time receptionist for Villa St. Joseph and as a volunteer in the Congregation’s Development Office. Sr. Mary Eileen was known for her creativity and quick wit, which brought laughter and delight to others, and for her openness to whatever life unfolded for her. She will be remembered as gentle, compassionate and generous to those whom she encountered.

Donations in the name of Sister Mary Eileen may be sent to the Sisters of St. Joseph Memorial Fund, St. Joseph Convent, 1020 State Street, Baden, PA 15005.

Make a donation in memory of Sister Mary Eileen.