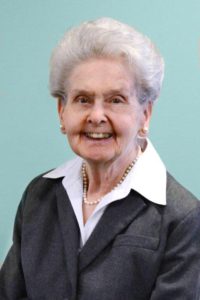 Sister Mary (Mary Walter) Hall, CSJ, 80, died Friday, April 14, 2017, in the 61st year of her religious life as a Sister of St. Joseph. The daughter of Walter and Irene Wassell Hall, Sister Mary entered the Congregation from St. Raphael in Pittsburgh and most recently served from 2000-2012 as Pastoral Associate at Our Lady of Guadalupe-St. Mary Parish in Kittanning, PA.

Shortly after her arrival as a missionary in Liberia, West Africa, in 1979, a violent civil war erupted, which profoundly affected Sister Mary and the students whom she taught. Living with limited electricity and no running water, she remained for seven years, relishing the chance to teach in classrooms with as many as 90 students “who hung on every word,” she recalled.  “It was any teacher’s dream come true.”

When she returned to the United States, Sister Mary drove her Chevette clunker from Baden to Appalachia in Eastern Kentucky where she served until 1993 as Pastoral Associate at two mission churches. She also conducted Bible school, preached on the streets, and broadcasted four-minute homilies on the local radio station. In her efforts to promote ecumenism, Sister Mary became the only woman member of the ministerial associations in Martin and Lawrence counties.  Concerned about the high illiteracy rate in Martin County, she began teaching a few people to read and eventually received a grant to coordinate the county’s literacy program. Within two years, the program exceeded its goals and was recognized as the state’s outstanding new program in 1990.

She later served as Program Director at Sacred Heart Southern Missions in Tunica, MS, Director of the Sisters of St. Joseph Learning Center in the Northview Heights neighborhood of Pittsburgh, and adult education instructor at Jubilee Kitchen Association in Pittsburgh. A self-ascribed “people-person,” Sister Mary was known for her compassionate outreach on behalf of the poor and disenfranchised. Whether protesting human rights violations in Central America or writing letters to Congress to reduce hunger and poverty, Sister Mary worked tirelessly for social justice.

“Not only has my religious life been rewarding and surprising, but it has been downright exciting because I have been afforded every possible opportunity to grow in my relationship with God,” Sister Mary said during her Jubilee celebration. She embraced the “many twists and turns” in her religious life, adding simply, “I loved the people.”

Donations in the name of Sister Mary may be sent to the Sisters of St. Joseph Memorial Fund, Development Office, 1020 State St., Baden, PA 15005.

Make a gift in memory of Sister Mary.