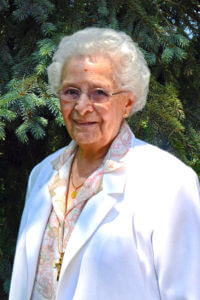 For 46 years, Sister Mary Magdalene served as a teacher and principal in the Dioceses of Altoona-Johnstown, Greensburg and Pittsburgh, and the Archdioceses of Miami and Atlanta.  Her longest education ministry was at St. Patrick in Johnstown where she served as principal from 1989-1997 following four years of teaching. She previously was co-principal at West End Catholic School in Johnstown from 1971-78. Her early ministry sites included St. Raphael in Pittsburgh, Holy Rosary in Perrine, FL, Our Lady of Victory in State College, PA, and St. Paul of the Cross in Atlanta, GA.

Sister Mary Magdalene was known as an excellent educator, who modeled gentleness and compassion in the classroom.  In a newspaper column in 1999, a former student who was taught catechism by Sister Mary Magdalene described her as “the sweetest, kindest, most understanding woman who surely had a halo up there underneath her habit.”

A skilled seamstress, she graciously accepted requests for mending or altering garments. In 2006, she was encouraged to submit hand-sewn dresses to a county fair competition, and she garnered two first-place awards. One of her favorite pastimes was cross-stitching, which became beautiful framed gifts for friends and family. A prayerful, humble woman, Sister Mary Magdalene had a great devotion to St. Theresa of the Little Flower and St. Mary Magdalene, her namesake.

Make a donation in memory of Sister Mary Magdalene.