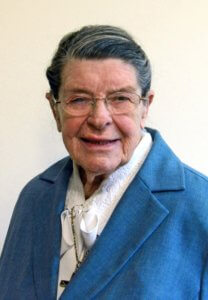 Sister Mary (Robert) Morgan, CSJ, 92, died Wednesday, May 19, 2021, in the 73rd year of her religious life as a Sister of St. Joseph. The daughter of Robert and Mary Elizabeth Hampsey Morgan, Sister Mary entered the Congregation from St. John in Uniontown, PA. From 1951-67, she taught at seven high schools: St. Raphael in Pittsburgh, Central Catholic in Johnstown, Annunciation in Pittsburgh, St. Veronica in Ambridge, Mt. Gallitzin in Baden, Bishop Guilfoyle in Altoona, and Mon Valley Catholic in Monongahela.

Following a five-year mission trip in 1967 to Borba, Brazil, in the Amazons, Sister Mary transitioned into parish work, serving as CCD Director at St. John in Uniontown, Parish Minister at St. Alphonsus in Murrinsville, PA, and Director of Religious Education at St. James in Sewickley. With an overwhelming desire to serve the poorest of God’s people, Sister Mary was called back to Brazil (1982-91) and then resumed parish work upon her return to the states. She was Parish Social Minister at St. Catherine of Sweden in Wildwood, PA (1991-2007) and religious education volunteer at St. Titus in Aliquippa (2007-2013).

Her most rewarding work, she recalled, took place at the parishes and in the remote Amazon jungles where she traveled, sometimes for days, by boat to communities along the Madeira River or by bike to Christ the King Parish. A high school Spanish teacher, Sister Mary easily became fluent in the native Portuguese language. Her expansive missionary work including teaching, coordinating CCD, and serving as social minister. She also started a Bible Circle for families in homes, organized a girls’ choir, and participated in a vocations group.

A friend remembered how Sister Mary secured funds to provide safe housing for a widow and her grandson whose home in Borba rested perilously on stilts in the bay. Ever mindful of global events and their impact on women, children and families, the soft-spoken yet vocal Sister Mary advocated passionately for social justice, peace and nonviolence. In recent years, she coordinated peace vigils in the Motherhouse chapel, provided hospitality at St. Joseph Spirituality Center, volunteered at a local food bank, and visited individuals in hospice care.

Known for her kind, gentle spirit, Sister Mary was fully present to all whom she encountered and often described her great joy in “working to build God’s kingdom.” With child-like wonder, she marveled at God’s beauty in others and creation, and thus gratitude was a constant refrain in her spirituality.
While reflecting on 50 years of religious service, Sister Mary said, “What stands in my mind more than anything is the wonder of God’s love and his care and direction and sustaining love . . . it blows my mind how God has been with me so faithfully and lovingly through the ups and downs that come into every life.”

Sister Mary was predeceased by four brothers, Robert, Dick, Daniel and Tom. She is survived by a sister, Rose Ann Campbell of Chalk Hill, PA, numerous nieces, nephews, grandnieces and grandnephews, Associates, and the Sisters of St. Joseph. The Sisters of St. Joseph are grateful to the Supportive Living staff at the Motherhouse and the Concordia at Villa St. Joseph staff for their care of Sister Mary. A Memorial Mass will be scheduled at a later date.

Donations in the name of Sister Mary may be sent to the Sisters of St. Joseph Memorial Fund, Development Office, 1020 State St., Baden, PA, 15005.

Make a donation in memory of Sister Mary.