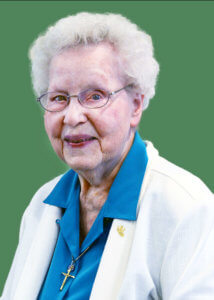 Sister Maxine (Clarence) Little, CSJ, 90, died Sunday, November 22, 2020 in the 74th year of her religious life as a Sister of St. Joseph. The daughter of Clarence and Bertha Brandt Little, Sister Maxine entered the Congregation from St. Bernard parish in Indiana, PA.

Responding to the needs of the neighbors, Sister Maxine co-founded Kinder Klasse, a Montessori-oriented preschool program that opened in 1978 in a converted auto repair shop in Ambridge. For the next 24 years, she served as a co-administrator and teacher of the program where she was known for her tender, loving care of the children. Sister Maxine espoused a holistic approaching to teaching the preschoolers, integrating Christian behavior and inviting parent involvement. “I have always had a genuine love of God’s little ones. I love teaching them how to pray,” she said when reflecting on her ministries.

Sister Maxine also cared for babies and toddlers at the St. Joseph Infant Home in Ebensburg (1956-57), and, before retiring, she served as a secretary at St. Mary Byzantine Church in Ambridge (2004-2009). Gentle and kind, Sister Maxine often quietly reached out to other Sisters, sharing her bright smile and inner joy. Though she enjoyed travel, walks, and word puzzles, Sister Maxine found prayer to be the most enriching of her experiences: “I look into the eyes of Jesus and he looks back at me. Sometimes we speak and sometimes we need no words at all.”

Predeceased by a brother, Paul Little, and two sisters, Shirley Ann Little-LaRoss and Mary Little Babic, Sister Maxine is survived by a sister, Dorothy Agostine of Mentor, OH, and a brother, Lawrence R. Little of Smiths Grove, KY; and nieces and nephews, grandnieces and grandnephews, the Associates, and the Sisters of St. Joseph.

Make a donation in memory of Sister Maxine.