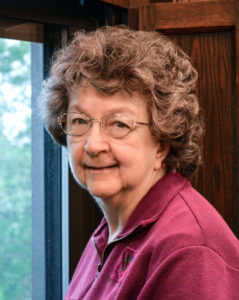 Sister Melania Polensky, CSJ, 81, died Thursday, July 28, 2016, in the 57th year of her religious life as a Sister of St. Joseph. The daughter of John and Anna Polensky, Sister Melania entered the Congregation from St. Joseph Parish, Cokeburg, PA.

For nearly 50 years, she ministered primarily in education in the dioceses of Pittsburgh, Greensburg and Altoona-Johnstown. A proponent and practitioner of Montessori Education, Sister Melania served as Director of Preschool and Kindergarten at Fontbonne Academy in Bethel Park (1975-78) and at St. Mary in Freeport (1980-87).

Since 2010, Sister Melania, who was known to always roll up her sleeves and graciously help wherever needed, coordinated the Congregation’s library where she also engaged retired sisters in making crafts. In the Motherhouse, she beautifully created and conducted prayer services and regularly led a “Morning with God” day of prayer through St. Joseph Spirituality Center. Soft-spoken, gentle and creative, Sister Melania was named an “unsung hero” of the Alle-Kiski Valley by a local newspaper, noting her efforts to “help everyone to be better Christians and parents.”

During her 50th Jubilee year, she recalled a life-changing experience while marching at a rally in Pittsburgh for migrant workers: A woman, dressed in a fur coat, stepped from the crowd, called her a name and spat in her face. “I have never forgotten that and how the poor and disenfranchised have to endure degradation,” she recalled. A social justice advocate for all of God’s people and all of Creation, Sister Melania once described her religious life: “To walk with God is to make the world a bit more beautiful, more just, more at peace, to love as I am loved.”

Sister Melania is survived by her uncle, Charles (Rose) Sklarski of Seminole, FL; cousins and the Sisters of St. Joseph of Baden.

Donations in the name of Sister Melania may be sent to the Sisters of St. Joseph Memorial Fund, St. Joseph Convent, 1020 State St., Baden, PA 15005.

Make a donation in memory of Sister Melania.