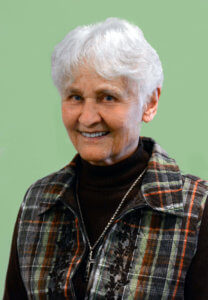 Sister Monica (John Baptist) Suhayda has ministered alongside the Shoshone and Arapaho people on the Wind River Indian Reservation in Wyoming for nearly five decades.

She arrived at St. Stephens Indian Mission in 1974 to serve as an alcohol counselor but instead spent a year leading the religious education department. A former educator and principal, the familiarity of teaching eased her transition to reservation life.

Fondly referred to as an “elder,” Sister Monica now ministers as curator of the Heritage Center and Gift Shop, which she launched years earlier as a display of crafts offered to fund outreach and counseling materials. The center celebrates tribal artistry and craftsmanship and serves as a gathering place where Sister Monica continues to share the warmth of God’s love.

“What I may have given [the Shoshone and Arapaho people] is minimal to what I have received from them,” she wrote in a reflection in 1982 – a sentiment that remains in her heart.

Send a note to Sister Monica or make a donation in her honor.