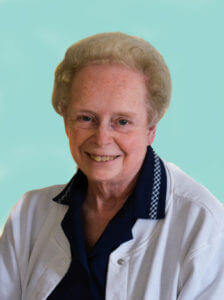 Recognized as an outstanding leader in education, Sister Patricia Ann served for nearly 50 years in Pennsylvania, Tennessee, and West Virginia. She began ministry as a teacher and reading coordinator in schools in Pittsburgh and Johnstown before assuming dual roles in the Diocese of Altoona-Johnstown as Educational Consultant (1974-1988) and Reading Supervisor (1978-1988).

Following a three-year tenure as Associate Superintendent of Schools in the Diocese of Memphis, Sister Patricia Ann served as Principal of St. Francis Central Catholic School in Morgantown (1991-2009).  She fully modeled and inspired the school’s philosophy to recognize the individuality of each student and “to raise the awareness level of loving God and neighbor in ways that bear fruit in the life of society.” Sister Patricia Ann believed that building “faith communities” beyond the classroom and animating Gospel values were just as important as academic excellence for students to thrive.

For her exemplary leadership at St. Francis, Sister Patricia Ann received the Bishop’s Cross in 2004, and the school was recognized by the U.S. Department of Education as a 1993-94 Blue Ribbon Elementary School and featured in Today’s Catholic Teacher as a model of Catholic social justice teachings.

In honor of her 50th Jubilee and Irish heritage, students and staff performed a musical tribute bedecked with green streamers and balloons. At the time, a sixth-grade student remarked, “She teaches us not just to strive for the bare minimum. She tells us to go higher and higher.” Upon retirement at the school, Sister volunteered in the Development Office and the Congregation’s library.

When Sister Patricia Ann, the oldest of seven children, lost her father at age 15, she thought her dream to become a Sister of St. Joseph was dashed. “My mother, being a woman of faith, said, ‘God does not close one door without opening another. Go. God will take care of us’.”

Sister Patricia Ann is survived by two sisters, Kathy Leone of Pittsburgh and Patty (Tom) McMillin of Indian Head, IL, and a brother, John (Mary Lou) Foley; she was preceded in death by two brothers and a sister. Also surviving are nieces and nephews, grandnieces and grandnephews, Associates, and the Sisters of St. Joseph.

Make a donation in memory of Sister Patricia Ann.