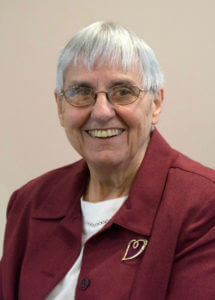 Sister ministered in the field of education for more than 35 years in the Dioceses of Pittsburgh, Altoona/Johnstown, and Sioux Falls, SD. She served as teacher, including 6 years at Sacred Heart School in Altoona, and as principal including Transfiguration, Monongahela, St. Bede and St. Raphael in Pittsburgh and 10 years at St. Bernard School in Mt. Lebanon. Sr. Patricia also ministered as principal and Pastoral Care Coordinator at St. Joseph Indian School, Chamberlain, SD, and as Director of Education at Sacred Heart Southern Missions in Walls, MS.

From 1998-2003 Sister served on the Leadership Team of the Sisters of St. Joseph. She was co-manager at St. Thomas More Manor in Bethel Park, and manager of Beechview Manor from 2007 to the present. Throughout her life Sr. Patricia reached out in service to others with care and compassion. She was an excellent teacher and dedicated administrator. She generously served on several boards and committees where she shared her gifts of wisdom and insight.

Donations in the name of Sister Mary Dennis may be sent to the Sisters of St. Joseph Memorial Fund, St. Joseph Convent, 1020 State Street, Baden, PA 15005

Make a donation in memory of Sister Patricia.