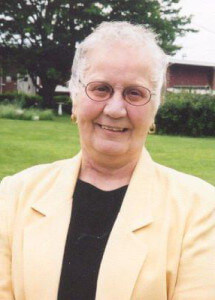 The daughter of Erhard and Rose Marie Harlan Vogel, Sister Rose Marie entered the Congregation from St. John Parish, Johnstown, PA. For 26 years Sister ministered in the field of education as principal and teacher in the Pittsburgh, Greensburg, and Altoona Johnstown Dioceses, including 6 years as principal of St. Joseph School in New Kensington.

In 2003 Sister Rose Marie was presented the Prince Gallitzin Cross by Bishop Joseph Adamec for her service to the Diocesan Church of Altoona Johnstown. After teaching bible studies at Valley Pike Manor in Johnstown for a short period of time, Sister came to the Motherhouse where she continued to care for others through her prayer ministry and briefly as Medical Transport Manager.

Sister Rosie was fun loving and had a great sense of humor. Throughout her life, she touched the lives of many through her compassion and generosity. She will be especially remembered for her comforting presence to the sick, the dying and the bereaved.

Sr. Rose Marie is survived by a sister, Norene Pozniak of State College, PA, a step-sister, Mary Kaye Tacik of Johnstown, PA, a brother, Ronald (Carole) of Johnstown, PA, nieces and nephews, grandnieces and grandnephews, and the Sisters of St. Joseph of Baden.

Donations in the name of Sister Rose Marie may be sent to the Sisters of St. Joseph Memorial Fund, St. Joseph Convent, 1020 State Street, Baden, PA 15005.

Make a donation in memory of Sister Rose Marie.