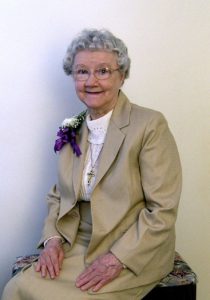 Sister Rosemary (Edna) Snyder, CSJ, 88, died Tuesday, March 13, 2018, in the 71st year of her religious life as a Sister of St. Joseph. The daughter of the late Anne and Howard Snyder, Sister Rosemary entered the Congregation from St. Joseph in New Kensington, PA.

Sister Rosemary served as a teacher for 54 years in the dioceses of Pittsburgh, Altoona-Johnstown, Greensburg, and Columbus, Ohio. Her longest ministries included Mt. Gallitzin Academy in Baden (1983-1993); Assumption in Pittsburgh (1953-59); St. Bede in Pittsburgh (1962-67); and Kinder Klasse, a preschool in Ambridge (1996-2004). At Kinder Klasse, Sister Rosemary served with her beloved friend, Sister Maxine Little. When they retired together in 2004, they expressed their gratitude for the many graces that God bestowed on the program, which was founded by the Sisters of Joseph.

Following retirement, Sister Rosemary became a ubiquitous volunteer in the Motherhouse, generously and quietly offering her time: filing papers, watering plants, delivering mail, posting signs, and companioning daily with Sister Maxine. In unison, they often walked the grounds and chatted while resting on a bench.

Unassuming and humble, Sister Rosemary was known for moving at a fast clip, flitting from one activity to another. “No one will ever know all the little things she did for others – and without fanfare, without attention,” a friend said. Sister Rosemary, who prepared thousands of young children to receive the sacraments, once said that the “excitement of children as they discover new skills and appreciate life” brought her great joy.

Donations in the name of Sister Rosemary may be sent to the Sisters of St. Joseph Memorial Fund, Development Office, 1020 State St., Baden, PA, 15005.

Make a gift in memory of Sister Rosemary.