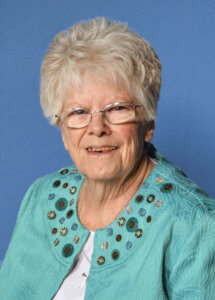 Sister Ruth (Vincent) Colaianne, CSJ, 96, died Friday, September 24, 2021, in the 78th year of her religious life as a Sister of St. Joseph. The daughter of John (Giovanni) and Marie (Maria Rosa) Boker Colaianne, she entered the Congregation from Holy Rosary parish in Pittsburgh.

Sister Ruth served in education for more than 30 years in 11 schools throughout the dioceses of Pittsburgh, Altoona-Johnstown, Greensburg, Atlanta, GA, and St. Petersburg, FL. Primarily a high school teacher, she served at Annunciation in Pittsburgh (1950-56), Bishop Guilfoyle in Altoona (1955-59), Mon Valley Catholic in Monongahela (1959-63), Drexel in Atlanta (1963-67) and Greensburg Catholic in Greensburg (1971-76).

Sister Ruth made a profound impression on the Drexel Class of 1967 who dedicated their yearbook to her, citing her “generous spirit, sunny smile, and refreshing sense of humor.” After serving as an administrative assistant at St. Joseph High School in Atlanta (1967-68), Sister Ruth ministered as principal of Fontbonne Academy in Bethel Park (1969-71). She eventually transitioned into diocesan leadership positions, serving as a religious education consultant for Catholic Schools in the Pittsburgh Diocese (1979-86) and for the Wheeling-Charleston Diocese (1986-92).

Following a sabbatical year at the University of Notre Dame, Sister Ruth ministered in parish social ministries at St. Elizabeth Ann Seton in Carnegie, St. Philip in Crafton, and St. Catherine in Pittsburgh. While in West Virginia and the South Hills of Pittsburgh, Sister Ruth regularly gathered for prayer with former members of the Congregation. Some of the relationships that she nurtured were among the charter members of the Associates of the Sisters of St. Joseph. In retirement, Sister Ruth joyfully embraced new opportunities to advance the Congregation’s mission to serve God and neighbor.

While in her 90s, Sister Ruth continued to coordinate the annual lottery fundraiser, showing up for “work” in the Development Office regularly and taking great pride in the project. For each peanut butter and jelly sandwich she made for those served by the Salvation Army, Sister Ruth said she would recite a silent prayer.

Sister Ruth is survived by a sister, Dorothy Colaianne, FL, a sister-in-law, Elizabeth Colaianne of South Lyon, MI; nieces, nephews, grandnieces, and grandnephews, Associates and the Sisters of St. Joseph.  The Sisters are grateful to the Supportive Living staff at the Motherhouse for their care of Sister Ruth.

Donations in the name of Sister Ruth may be sent to the Sisters of St. Joseph Memorial Fund, Development Office, 1020 State St., Baden, PA, 15005.

Make a donation in memory of Sister Ruth.