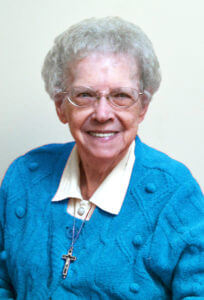 Sister Ruth (Venard) Sattler, CSJ, 92, died Monday, October 8, 2018, in the 76th year of her religious life as a Sister of St. Joseph. The daughter of the late Louis and Sarah Herwig Sattler, Sister Ruth entered the Congregation from St. Titus Parish in Aliquippa.

From 1949-1968, she taught at high schools that included St. Joseph in Natrona, St. John in Uniontown, St. Veronica in Ambridge, and Quigley and Mount Gallitzin in Baden. For more than three decades until 2003, Sister Ruth taught music, band, instrumental classes and piano lessons at Mount Gallitzin Academy. For the next nine years, she served as organist for the Congregation while continuing to teach private piano lessons.

When Sister Ruth took her first piano lesson at age 9, she set the stage for a music ministry that she passionately embraced and one that continues to resonate with hundreds of former students who affectionately recall the 1963 album, In a Manger Lowly, which she directed. The beloved teacher composed more than 50 liturgical hymns, some of which have been incorporated into an original ballet written by a former Mount Gallitzin Academy student. Sister Ruth formerly played trombone in the Diocesan Sisters Orchestra and the Sewickley Symphony Orchestra.

Known for her ever joyful and welcoming spirit, Sister Ruth recalled that her teachers at St. Titus in Aliquippa greatly influenced her vocation decision. “I was so impressed by how much the Sisters loved one another that I wanted always to be part of that,” she said.

Donations in the name of Sister Ruth may be sent to the Sisters of St. Joseph Memorial Fund, Development Office, 1020 State St., Baden, PA, 15005.

Make a gift in memory of Sister Ruth.