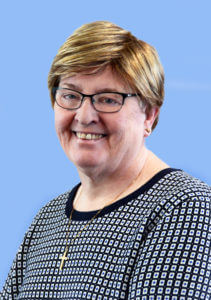 Sister Ruth Weiss, CSJ, 69, died Thursday, February 14, 2019, in the 52nd year of her religious life as a Sister of St. Joseph. The daughter of the late Charles and Genevieve Smith Weiss, Sister Ruth entered the Congregation from Annunciation parish in Pittsburgh.

Sister Ruth served at Mount Gallitzin Academy (MGA) from 1973 to 1977 and from 1987 to 2005. She also taught at St. Catherine in Beechview (1977-81), and St. Peter in Somerset, PA (1981-87). Sister Ruth ministered as an adult literacy instructor at Penn State Beaver from 2012 to 2015, and, subsequently, as a home health care aide. Sister Ruth served more than half of her 38-year education ministry at MGA where she recalled that her “most precious experiences” were preparing children for First Holy Communion and Reconciliation.

“My desire was to instill a deep and profound love for Jesus and an understanding of the gifts that these sacraments provided in their faith development,” she said during her 50th Jubilee celebration. “In my years of being an educator of children and adults, my desire was to accentuate the potential of my students and to help them strengthen their God-given talents and abilities.”

Known for her kindness, humility and gentleness, Sister Ruth was quiet, yet fully present to all with whom she interacted. With a generous heart, she was open to what God and the “dear neighbor” asked of her daily. Sister Ruth served most recently as a volunteer in the Development Office and channeled her expert sewing skills into making artisan projects, such as dining scarves and aprons, to help support the mission of the Congregation.

Sister Ruth credited the Sisters of St. Joseph who taught her in fifth grade for influencing her vocation call. Her constant desire, she reflected recently, was to embody the Congregation’s charism of “being a woman of compassion and concern for the ‘dear neighbor.’ ”

Make a donation in memory of Sister Ruth.