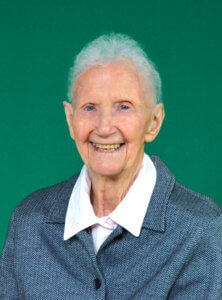 Sister Silveria Mannion, CSJ, 93, died Sunday, September 12, 2021, in the 76th year of her religious life as a Sister of St. Joseph. The daughter of John and Anne Patton Mannion, Sister Silveria entered the Congregation from St. Veronica in Ambridge, PA.

Sister Silveria ministered in education for 50 years in the Dioceses of Pittsburgh, Greensburg and Altoona-Johnstown. She taught at schools that included St. Bernard, St. Bede, Assumption and Holy Rosary (Pittsburgh) as well as St. John (Uniontown) and St. Bernard (Indiana) before becoming a guidance counselor at the Diocesan Child Care Center in 1962.

Sister Silveria served as a counselor and teacher at Quigley Catholic High School (Baden) from 1972-1981 and taught art and religion at St. James (Sewickley) from 1984-1999. “Coming to St. James and being with younger children again is one of the best things that ever happened,” she recalled, embracing new opportunities to teach art and prepare children for the sacraments. Passionate about the arts, Sister Silveria dabbled in making ceramics and painting, and she recently recalled how overjoyed she was when one of her canvas paintings sold at the Sisters’ annual Harvest Festival.

After returning to the Motherhouse in 1999, Sister Silveria served 10 years as Sacristan in the Chapel. Known for her gentle nature and reverence for others, the soft-spoken Silveria warmly welcomed all visitors to the Motherhouse. As a third grader at St. Veronica, Sister Silveria said she first pondered religious life after experiencing the kind and joyful spirit of her teacher, Sister Mildred (Ildephonse) Boeh. “I can honestly say that despite difficult times, I have never been sorry for the choice I made. God is so good,” she reflected at her Golden Jubilee.

Sister Silveria credited her parents, who modeled God’s love for their nine children, for inspiring her devotion to the children she taught. She often conveyed to her students what she believed was an important lesson: “Be good to your parents.”

Donations in the name of Sister Silveria may be sent to the Sisters of St. Joseph Memorial Fund, Development Office, 1020 State St., Baden, PA, 15005.

Make a donation in memory of Sister Silveria.