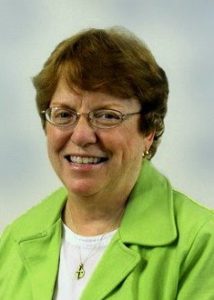 Sister Therese (Regina Marie) Melucci, CSJ, 77, died Saturday, March 30, 2019, in the 59th year of her religious life as a Sister of St. Joseph. The daughter of the late Donato and Michelina Principe Melucci, Sister Therese entered the Congregation from St. Catherine of Siena parish in Pittsburgh.

For nearly four decades, Sister Therese was an early childhood educator in the Dioceses of Pittsburgh, Greensburg and Altoona-Johnstown. Her longest teaching ministries were at Our Lady of Victory School in State College, PA (1970-1974), Annunciation in Pittsburgh (1979-1986), and Mount Gallitzin Academy (MGA) in Baden (1974-1979 and 1994-2009). She also ministered as Motherhouse Coordinator from 1986 to 1994.

An ever-present volunteer, Sister Therese always stepped up wherever she was needed – at Liturgy, at a fund-raising event, or at the bedside of a sick Sister. Known for her warmth and hospitality, Sister Therese was a model of compassion, generosity and faith not only for the countless children she taught but to all whom she encountered daily with a radiant smile and promise of prayers. During her 50th Jubilee celebration, Sister Therese reflected: “One of the most significant ways that I have responded to God’s call is through the education of young children. I have been privileged to walk with many children at a tender and impressionable age.”

She believed that children have a natural attraction to Jesus, and she emulated that closeness to Jesus. To ease the transition for new kindergarten students and their parents, Sister Therese personally visited their homes prior to the MGA school year to build home-school relations. She instilled the “I Care” rules in young children in hopes of planting seeds of tolerance and love, and she fostered in them a reverence for the beauty of the Baden grounds.

“It is essential to love and respect the individual differences among us as members of the world community,” she wrote in her Jubilee reflection.” I see all of us as one with the Earth and, as a result, we are called to use its resources with great care. This is a relationship of union and reconciliation with all of creation.”

Make a donation in memory of Sister Therese.